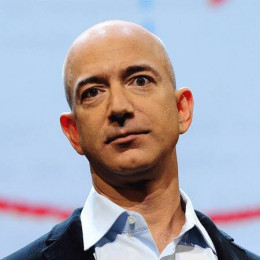 Jeff Bezos is an American businessman and investor who is chief executive officer of Amazon.com, Inc., an online merchant of books and later of a wide variety of products. On top of that, he falls under the list of most powerful figures in technology sector with a net worth roughly $57 billion.

Jeff Bezos is an American businessman and investor who is chief executive officer of Amazon.com, Inc., an online merchant of books and later of a wide variety of products. On top of that, he falls under the list of most powerful figures in technology sector with a net worth roughly $57 billion.

Jeff Bezos Has Someone New in Life

Jeff Bezos, the media proprietor and CEO of Amazon is currently in a live-in-together relationship with TV show host Lauren Sanchez. The lovebirds has been kindling romance since April 2019 till  today. Indeed, people began speculating about their relationship in January of 2019.

In addition to that, the alleged pair already spent some romantic date nights in NYC too. He was dating Sanchez like any other couple after they overcome a divorce settlement with their ex-partners.

Like Jeff ended his 25 years of wedding with ex-spouse Mackenzie, Lauren also dissoved her 13 years of bonding with her ex-husband with two children. Though, Jeff might have just overcome an eye-watering £28 billion divorce bill, he is still the world's richest man living in a £134 million LA mansion. He owns a 300 acre Texas ranch with a space station to prove it. He shares the most expensive Los Angeles house with partner Lauren.

Bezos was happily married to his love of life. Mackenzie Tuttle, a D.E. Shaw research associate in 1993. By profession, she is a novelist. The couple looks perfect with each other. He and his wife personally donated $2.5 million to pass a same-sex marriage proposal.

Jeff and MacKenzie stayed in a conjugal relationship for 25 years. Prior to the separation, Bezos and MacKenzie announced on Twitter their intent to divorce after  two and half decades on January 9, 2019.

Thus, on April 4 of the same year, the divorce was finalized with Bezos keeping 75% of the couple's Amazon stock and Miss Bezos receiving the remaining 25% in Amazon stock. MacKenzie serviced as a research associate for Jeff Bezos at D.E. Shaw, a NYC hedge fund.

Together they were blessed with four children including three sons and a daughter adopted from China. Neither of the pair has ever disclosed name of their children yet.

How Much is Jeff Bezos' Net Worth?

Jeff Bezzos possesses an estimated net worth of $138 billion in 2020 according to the Bloomberg Billionaiares Index, making his position as a the world's wealthiest man.

Jeff spends his firtune on real estate across the country, a $65 million Gulfstream Jet and his space exploration company, Blue Origin. Calculating his annual earnings, Jeff earned $6.54 billion a month, over $1.5 billion a week and more than $215 million a day till 2018.

He ran a frugal company culture which doesn't offer perks such as free foods and massages. He was an early investor in Google (1998). He invested $250,000 that was about  3.3 million shares while the company went viral in 2004. In 2012, he gave away $2.5 million to defend gay marriage in Washington.

That's not all, Jeff has donated $42 million in cash and part of his land in Texas to the construction of THe Clock Of The Long Now, an underground clock made to work for 10,000 years. In August of 2013, he bought The Washington Post for $250 million. The Washington Post was growing so fast that it beat The New York Times in unique visitors for the very first time.

Moreover, his soace company Blue Origin made record in 2015 becoming one of the first commercial companies to successfully launch a reusable rocket. The billionaire owned a personal jet which crashed in 2003 while taking home the Washington Post reporter. Bezos owned a house on Lake Washington, as well as a $24.25 million worth Beverly Hills Estate.

He is son to Jacklyn aka Jackie and Ted Jorgensen. When he was just 15 years old his mother remarried another man named Miguel Bezos who later adopted him legally. From an early age Bezos showed signs of brilliance. For instance, when he was a toddler, he took apart his crib with a screwdriver cause he wanted to sleep in a real bed.

As a school kid, he wanted to be a space entrepreneur. From ages 4 to 16, Bezos spent summers on his grandparent's ranch in Texas, engaging in farm works like repairing windmills and castrating bulls. His grandpa Preston Gise, was a great inspiration for Bezos and developed his passion for intelectual pursuits.

Soon, Bezos went crazy with reruns of the original "Star Trek" and became a fan of the later versions too. He thought of calling Amazon MakeItSo.com in reference to a line from Captain Jean-Luc Picard.

Speaking of education, He attended Miami Palmetto Senior High School. He graduated with Bachelor of Science degrees in electrical engineering and computer science from Princeton University. He was also President of the Princeton chapter of the students.

Professionally she is an an American novelist. They met each other when she used to work for him at D.E. Shaw, a New York City hedge fund. Together they have four children.