President of Amazon, Jeff Bezos is finally dating his girlfriend like other regular couples after each one reached a divorce settlement with her ex-partners.

Jeff Bezos and his girlfriend Lauren Sanchez finally stepped out and flaunted their romance in a date night in New York City. Of course, this is the very first time the pair have been spotted together since news about their affair broke in January.

"Now that each has reached a divorce settlement, they thought the time was right to finally date like regular people."

The Amazon CEO and founder, 55, and his girlfriend, 49, enjoyed a dinner date with her sister at a restaurant in New York City where they ate burgers and pizza.

"Both Jeff and Lauren have been focused on their kids for the last several months."

"Any relationship had to be on the back burner for that reason. Now that each has reached a divorce settlement, they thought the time was right to finally date like regular people."

The richest man in the world, Bezos who has an estimated net worth of about $137 billion revealed he and his ex-wife, MacKenzie Bezos, 48, finalized their divorce via Twitter post in April.

Also Read: Amazon Founder Jeff Bezos Married To Wife Since 1993. The Couple Live Together With Their Four Children At Their Residence in Seattle

Bezos and MacKenzie agreed on a record-breaking divorce settlement of at least $35 billion. Their divorce deal broke a previous $3.8 billion record by art dealer Alec Wildenstein and his wife Jocelyn set in 1999. It left the world's richest man with 75% of the couple's Amazon share. 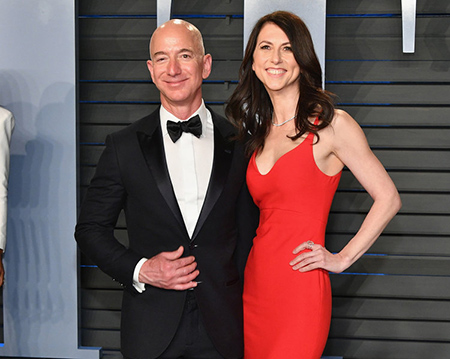 "Grateful to have finished the process of dissolving my marriage with Jeff with support from each other and everyone who reached out to us in kindness, and looking forward to the next phase as co-parents and friends."

"Happy to be giving him all of my interests in the Washington Post and Blue Origin, and 75% of our Amazon stock plus voting control of my shares to support his continues contributions with the teams of these incredible companies."

The former pair with four kids together announced their divorce back in January releasing a joint statement via Twitter.

Just like Jeff, his girlfriend, a TV host, and owner of an aerial company dissolved her 13 years long marriage with Patrick Whitesell with two children together. Also, she has an elder son from her previous affair.

Keeping their past relationships aside, let's congratulate the lovebirds for their amazing bonding. Will the pair marry anytime soon? Let's wait!