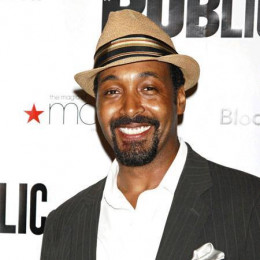 An American actor and singer who is widely popular for his role as police Detective Joe West on the CW's TV series, The Flash. Best known for his Broadway role of Tim Collins in a rock musical, Rent. He is none other than Jesse L. Martin.

Martin was born as Jesse Lamont Watkins in Rocky Mount, Virginia, U.S. on January 18, 1969. He is an American by nationality and belongs to the Afro-American ethnicity. He is the third son born to Jesse Reed Watkins and Virginia Price.

Martin’s father was a truck driver, and his mother was a college counselor. He is third children among four sons. His parent divorced when he was a child. Later, his mother remarried, and he adopted his step father's surname, i.e., Martin.

When Martin was in school, his family moved to Buffalo, New York. He attended the Buffalo Academy for Visual and Performing Arts, where he was voted Most Talented in his senior class. Later, he joined the theater program of New York University’s Tisch School of the Arts.

Martin joined John Houseman’s The Acting Company after graduation and toured the states. He then made his appearance in Shakespeare’s Rock-in Roles at the Actors Theater of Louisville.

Martin started his Broadway career in Timon of Athens. He performed in The Government Inspector with Lainie Kazan as well. Later he starred in soaps and some commercials. In 2005 he debuted in a role in Pulitzer Prize-winning Broadway musical "Rent."

In 1999, Martin played a role of Detective Ed Green on Law & Order. He was the fifth-longest cast member behind S. Epatha Merkerson, Sam Waterston, Jerry Orbach, and Steven Hill.

Martin, 48, might be married, as he has not confirmed his relationship status to the public. He currently resides in Manhattan. He has not been involved in any controversial situation as well.

Also, there are no rumors regarding his affairs or relationships with anyone. He has not talked about having a girlfriend in the past. However, he might be happy with his single life.

Height, Net Worth, and Salary