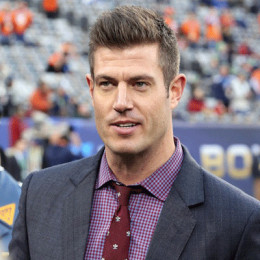 Jesse Palmer is a Canadian sports commentator and analyst who was a former college and professional football player playing in the NFL as a quarterback. He is regarded as one of the most handsome commentators in the Canadian News Network. He currently works for the ESPN/ABC news in the United States as college football analyst and for TSN in Canada. He went to St. Pius X High School and the University of Florida. His father is Bill Palmer and mother's name is Susan Palmer.

Jesse James Palmer was born on October 5, 1978, in Toronto, Ontario to Bill Palmer, a former player for the Ottawa Rough Riders and Susan. His mother was a prominent fashion, and print model, co-founder of Barrett Palmer Models and former owner of the original ITM International Top Models, a modeling agency and training center located in Ottawa (eventually became IMM International Model Management). He was raised in Nepean, Ontario, a suburb of Ottawa.

He went to Confederation and St. Pius X high schools, however as an amateur football player, he played on teams in the Ontario Minor Football Association. Primarily, he played for Myers Riders Football Club in Ottawa.

Palmer started his career playing for coach Steve Spurrier's Florida Gators football team in 1997 after accepting an athletic scholarship at the University of Florida in Gainesville, Florida. He played for the team till 2000.

In the senior year, he was chosen as one of the team captains. His leadership quality and courage won him a Gators' Fergie Ferguson Award. He ended his college career with 3,755 passing yards.

Going pro, Palmer was selected by the New York Giants in the fourth round of the 2001 NFL Draft and played four seasons from 2001-2004 for the Giants.

He was a quarterback for the Giants but spent most of his career as a backup behind starter Kerry Collins. After four years as a backup, he was let go on September 2, 2005, by the Giants. He was the second Canadian after Mark Rypien of Washington Redskins to start as a quarterback position in the NFL.

Palmer then moved on to the Canadian Football League and Ottawa Renegades wanted him as their quarterback but was held by the Montreal Alouettes. He also showed interest in playing for his hometown.

Jessie Palmer, wanting to stay in the NFL, scanned for opportunities working with Minnesota Vikings and Oakland Raiders. He also was temporarily signed by the San Francisco 49ers on November 1, 2005, both their quarterbacks, Alex Smith, and Ken Dorsey were injured. After their return, he was released without playing a down.

A few months later, in 2006 off-season he was resigned by the 49ers and again on August 29, 2006, towards the end of training camp, he was released. Palmer was then signed by the Montreal Alouettes on September 11, 2006, to their developmental roster. However, he did not play a game for Montreal. At the start of 2007 season, he retired to pursue a broadcasting career.

During his initial phase in the industry, he worked as a color commentator for Fox for two games during the 2005 season ending and again appearing in 2006. Palmer appeared as an analyst and commentator on the NFL Network's NFL Draft on April 25, 2007.

After retirement from CFL, he served as a studio analyst for ESPN's College Football Live and ABC telecasts and often appeared with fellow Canadian John Saunders. Besides, he is also a game analyst on ESPN Thursday Night College football games and co-host on The Palmer and Pollack Show on ESPNU along with David Pollack, a former Georgia defensive.

He is a New York correspondent for CTV's eTalk, covering sports and entertainment events including, the 79th and 80th Academy Awards and Super Bowl. Also, he is TSN's Monday Morning Quarterback segment's NFL analyst.

Besides being an analyst, he made a guest appearance in the Law & Order: Special Victims Unit and hosted two seasons of Recipe to Riches, a food competition show. He became a part of Good Morning America as a Special Contributor on May 19, 2015. Further, he hosted Spring Baking Championship and Winter Baking Championship on Food Network.

As of September 17, 2017, Palmer is a host of the newly launched DailyMailTV.

As of now, Jessie Palmer seems to be single and engaged in his new show. However, he did have a girlfriend whom he met on season five of the reality show, The Bachelor in 2004. While on the reality show, he met Jessica Bowlin and the two had quite a connection. But their romance lasted only a few months after the show ended.

He does not like the public to know his personal affairs and love to maintain his low profile. He has been discreet regarding his personal life and loves his privacy. However, looking into his past affairs, he was in a relationship with a woman for a brief stint.

Palmer is currently dating freelance photographer Emely Fardo. The couple has been open about their relationship with fans and media.

Made it #ValentinesWeekend #Tulum #Mexico

The couple celebrated Valentine's Day 2019 and shared a beautiful image together.

The star celebrated his 40th birthday in October 2018 with his soulmate.

His girlfriend shared the above post celebrating the big day of the star. The image captioned,

"Habby birthday to my best friend and the man of my dreams! A vida e muito melhor com voce#birthdayboy #love #happybirthday #hapiness #memories"

The former NFL player, Jessie Palmer has an estimated net worth around $8 million. He has worked as an analyst for Fox as well as ESPN. It was reported he signed a seven-figure multi-year contract with ESPN.

Currently, he is the host of the newly launched DailyMailTV, which adds more to his income.