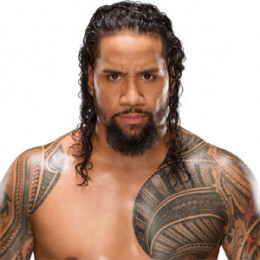 Jonathan Solofa Fatu, known as Jey Uso is a. American wrestler and a member of WWE. He is famous for Flordia Championship Wrestling, WWE, Pro Wrestling Illustrated. Jey is famous for his technique in the ring. Jey is a part of wrestling with his tag team partner and his twin brother known as Jonathan Solofa Fatu (known as Jimmy Uso in the ring) under the name The Uso which means brother. Jey is of Samoan descent, and of white ethnicity. Jey has an American origin.

Jey Uso and his twin brother Jimmy Uso were born in a legendary wrestling family and to the former Intercontinental and tag team champion, father, Solofa Fatu better known as Rikishi.They are also members of Anoi’s family and Tonga Kid, and late Umaga is their uncle.The famous wrestlers The Rock and Roman Reigns are their cousins.
Jey grew up in Pensacola. Florida and attended Escambia High School there. Jey and his brother used to play football and were very competitive players. He then graduated from the University of West Alabama where he continued with football and played as a linebacker from 2001 to 2003 for the same university; his brother also played football but only for one season in 2003.

As the son of a professional wrestler, Jey's introduction to the world of wrestling started from the very beginning. Jey and his brother hung out backstage with the children of other pro wrestlers at their dad’s local matches

He began his training at a very early age from his father. The Usos started wrestling as a tag team as a part of Florida Championship Wrestling. They began each match by approaching the ring performing the Siva Tau, traditional Samoan war dance meant to strike fear in their opponent. The Uso technically made their debut at WrestleMania 27 in a dark match, but the triple threat match at WrestleMania 28 against Primo and Epico and Justin Gabriel and Tyson Kud marked their broadcast debut in WrestleMania.
They have held the tag team title twice. The Usos' won their first title in early March of 2014 after defeating The New Age Outlaws. But their reign only lasted for a year after they lost to Goldust and Stardust in Sepetmenber. The Uso gained their title again two months later from The Miz and Damien Mizdow.
Jey style represented the seamless blend of Samoan tradition and American innovation which is somehow different from the technique of his great uncles.

Jey Uso is a married man. He is married to his wife Takecia Travis in 2015. The duo has two sons together. Except for this, there is no information on Jey or his wife or his son. The public came to know about the news of Jey's marriage to Takecia when his sister in law Naomi posted a picture of it on her social media. Jey's wife Takecia has not been in public yet and so there is not much information about her.

As a handsome guy, it is pretty sure that he has been in relations with many women in the past but till date, no information on his past relationship has come forward. Talking about his present relation, he as well as his wife and children seem to be very happy as a family. There are no any rumors of any of them having any extramarital relationship or affairs. There is no sign of them getting a divorce anytime soon.

One of the most talented wrestlers of WWE, Jey Uso has a net worth of $0.3 million and is living a luxurious life.

Takecia Travis is the wife of wrestler Jey Uso from the famous wrestling duo The USO. They have two sons together and have been married for more than 2 years.