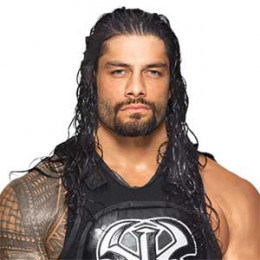 Roman Reigns is a former Canadian football player and professional wrestler known for his appearance on ‘WWE Raw’ or ‘Monday Night Raw’ and is presently signed with World Wresting Entertainment (WWE). He is three times winner of WWE World Heavyweight Champion’ and one-time winner of United States Championship’ in wrestling.

Leati Joseph "Joe" Anoa'i now famous as Roman Reigns was born on May 25, 1985, in Pensacola, Florida, United States. He belongs to white ethnicity. Roman was raised along with his brother Matthew Anoa’i by his father Leati ‘Sika’ Anoa’i, who is former American Samoan professional wrestler and mother Patricia Anoa'i.

Reigns enrolled at ‘Pensacola Catholic High School’ and later went to ‘Escambia High School’. In both schools, he became a part of the school's football team.

At that time he won several inter-school competitions and was titled ‘Defensive Player of the Year’ by ‘Pensacola News Journal’. He graduated from high school at ‘Georgia Institute of Technology’ where he was a member of the Georgia Tech Yellow Jackets football team alongside Calvin Johnson, who later became a wide receiver in the National Football League (NFL).

Roman Reigns started his journey as a professional wrestler in July 2010 and signed a developmental deal with World Wrestling Entertainment (WWE). He later became a part of it's Developmental Territory Florida Championship Wrestling(FCW).

Coming back meant more than just returning to the ring. It meant I was healthy enough to show my gratitude for those who sent their prayers, who continually thought about me, and that I was ready to raise awareness. Thank you for all those who voted, it is an honor to represent @WWE with this #ESPYS Award.

His debut match was against Richie Steamboat and was known by the ring name ‘Roman Leakee. Roman had lost a couple of matches before he gained his first win over Fahd Rakman. Since then, he continued competing in FCW, wrestling mainly in tag team matches.

On October 26, 2015, after winning a four-way fatal match against Alberto Del Rio, Dolph Ziggler, and Kevin Owens, he became the first contender for the ‘WWE World Heavyweight Championship’.

Get To Know More: The Undertaker

Besides claiming the ‘WWE World Heavyweight Championship’, he also won ‘Slammy Award’ for ‘Superstar of the Year’ as well as achieved the title of 'WWE Universal Champion.

The 31-year-old WWE star is a married man. Roman exchanged vows with Galina Becker. They were college lovers during their time at Georgia Tech College where Galina was a hurdle runner whereas Roman was a Yellow Jacket player.

Roman got engaged with his long-term girlfriend Galina Becker on 26 February 2012 and after two years they got married. Before starting their life as a husband and wife, they were already the parents of their sweet little daughter Joelle Anoa'i(Jo Jo) born on 14th December 2008.

The beautiful couple has been together for many years, and still, no rumors of them getting a divorce or having any extra affairs have emerged. Currently, they are living a happy life with their daughter.

Roman Reigns is a well-established wrestler of the current time.  He earns the good sum of money from his Wrestling career. He is living a luxurious lifestyle. As of 2017, his current estimated net worth is around $7 million.

The beautiful couple Roman Reigns and Galina Becker were blessed with an adorable daughter Joelle Anoa'i. She was born before their marriage.