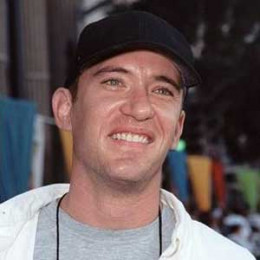 Jim Hanks is an American actor, director. He is also famous for giving his voice to the lead character Woody in "Toy Story. He won Angel Film Awards for his performance in "Blood Type." He is the younger brother of Tom Hanks, two times Oscar Awards, winner. The two brothers appeared in the movie "Buford's Beach Bunnies."

Born on 15th June 1961, America, Jim Hanks is the younger son of Larry Hanks and Janet Hanks. As his parents divorced in 1961, he then moved to Red Bluff, California along with his mother whereas his other siblings, Sandra, Larry, and Tom stayed with his father.

He attended Red Bluff and moved to Sacramento where he worked part time as a waiter. Later, he took acting classes and started working in a small role in B-movies and commercial voice-overs.

Jim started his career as a voice over artist in TV cartoon series"Sunset Beach" as Spike. Later he got recognition from the cartoon movie "Toy Story" where he voiced the lead character of Woody.

In the year 1993, he made his acting debut from the movie "Buford's Beach Bunnies" where he has portrayed the character of Jeeter Buford. His elder brother, Tom Hanks also featured in the movie.

After working on the big screen, he made his appearance in more than thirty movies, among which "Blood Type" was one of his successful movies and was praised for his performance. He was also awarded Angel Film Awards in 1999.

Jim Hanks has given his voice to different characters of TV series among which "Toy Story series" made him standout in the industry. Jim's most recent movie is "A Leading Man" and in 2017, he voiced the character Captain Wilson which was premiered on Disney XD.

Jim was in a relationship with Karen Praxel and the pair married on 26th May 1986. Karen is an American actress and producer famous for the "That Thing You Do!", "Postcard from the Volcano" and "Streamline You Care".

This couple is blessed with a baby boy which completed his happy family. Currently, his son is residing in Venice, California for his higher education.

Jim has successfully collected an estimated net worth of $2 million which he earned from his career in acting, directing, producing.

Gege Hanks is the single child of Jim Hanks and Karen Praxel. He currently resides in Venice, California.