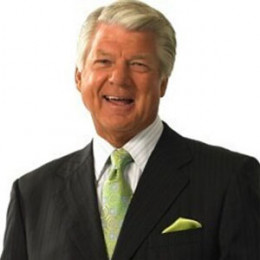 Jimmy Johnson is a legendary American football coach who is credited with various awards and championships. He was the only ‘Super Bowl Winning Head Coach’ for two years consecutively for the Super Bowl XXVII, and Super Bowl XXVIII held in the years 1993 and 1994 respectively. Johnson married Rhonda Rookmaaker in 1999. He was previously married to Linda Kay Cooper and has two sons, Chad Johnson and Brent Johnson.

Johnson went to Thomas Jefferson High School with a keen interest in football. Later, he joined the University of Arkansas and played for the Arkansas Razorbacks football team as a lineman.

Jimmy Johnson began his coaching career from Louisiana Tech University as an assistant coach in 1965. The following year,  he took up the same position at Picayune Memorial High School in Picayune, Mississippi.

In 1979, Johnson held the position of head coach at Oklahoma State University where he coached for next five years. Later, he joined as a head coach at the University of Miami. He accepted an offer by Jerry Jones to become the head coach of the National Football League's ‘Dallas Cowboys’ and continued there for four years from 1989  to 1993.

After a fallout with Jerry Jones, owner of ‘Dallas Cowboys’ and Johnson’s teammate from the Arkansas University team, he left the head coach position. Then, he worked as a TV analyst for Fox Sports for almost two years.

Johnson served as the head coach of  ‘Miami Dolphins’ in 1996. However, he recorded least wins in the season, and after three years Johnson resigned from the post.

After retirement, he returned to Fox Sports and is currently seen on Fox NFL Sunday. He has also made a few TV appearances and was also seen in the movie ‘The Waterboy.'

Johnson also appeared in various infomercials and was seen in ‘BetterTrades’ in 2007. He had a working contract with the American consumer goods giant ‘Procter & Gamble.'

In the year 2010, Johnson announced that he would be seen in commercials for the male enhancement pill ‘ExtenZe.'

Jimmy Johnson married longtime girlfriend, Rhonda Rookmaaker in 1999 in a private ceremony at the oceanfront home that he had recently purchased in the Florida Keys then.

It is the second marriage for both Rookmaaker and Johnson, 56. They first met in 1984 while he was coaching at the University of Miami and Rookmaaker was a hairdresser at Coral Gables salon. Fifteen years later, in January in 1999, the duo got engaged and got married in the same year.

He nearly decided to retire from coaching After his engagement. Johnson disclosed their engagement at a news conference where he was to announce his retirement, however, he decided to stay and not retire.

Johnson was previously married to Linda Kay Cooper, they tied the knot on July 12, 1963. The couple has two sons, Chad Johnson, and Brent Johnson. However, they divorced after 26 years years of marriage, shortly after the Dallas Cowboys hired Johnson.

American football coaching legend, Jimmy Johnson, has a net worth of $40 million. He is most famous for his coaching career in the NFL, and then later as a TV football analyst.

Johnson opened a restaurant, Three Rings in Miami after the three championships that he won on collegiate & professional levels. Later, he started a second restaurant under the same name in Oklahoma City.

Height: He stands at a height of 5 feet 11 inches.

On July 12, 1963, Johnson married Linda Kay Cooper and has two sons, Brent Johnson and Chad Johnson. However, the marriage of Johnson and Linda culminated in divorce, in January 1990.

In 1999, Johnson got married for the second time to Rhonda Rookmaaker and presently they reside in their abode at Islamorada, Florida