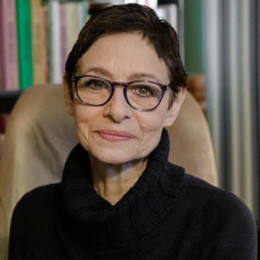 Famous American writer and actress Joan Juliet, who rose to fame from the American comedy-drama movie Julie & Julia. She is also a novelist and has published two of the novels: The Only Place to Be, New York: Random House in 1982 and Daughter of the Swan, New York: Weidenfeld, in 1987. She was married to John Helipern but they divorced after three years of their relationship.

Joan Juliet was born in 1948, as Joan Juliet Buck, as the only daughter of Jules Buck, an American film producer, and Joyce Ruth, actress, model and interior designer.

Her family moved to Europe in 1952 in reaction to the political repression in the United States at the time. She belongs to Jewish and her first language is French.

She was interested in modeling and acting from childhood. Later she attended Sarah Lawrence College but dropped out to work at Glamour Magazine as a book reviewer in 1968. She also worked for several magazines including American Vogue, London Observer, French Vogue and some others.

At the age of 23, she held the post of feature editor in British Vogue and then a correspondent for Woman’s Wear Daily in London and Rome. She also travelled to Los Angeles and stayed there from 1975 to 1976 where she worked as a novelist.

She made her acting debut from American comedy-drama movie Julie & Julia directed by Nora Ephron starring Meryl Streep, Amy Adams, Stanley Tucci, Jane Lynch and Chris Messina. The movie was made in $40 million budget and successfully collected $129.5 million in the box office.

She appeared  in The Aspern Papers in 2010 and Supergirl in 2013. Later, she made an appearance in theater including La Vie Materielle and The Constant Players. Currently, she featured on a play titled Babette’s Feast.

Joan married John Helipern, a contributing writer to Vanity Fair in 1977 in a private ceremony inviting some of the close friends and family members. After three years, the husband and wife divorced in 1980’s and moved on with their lives. The former pair didn't have any children.

It is also said that she was in love relationship with late Canadian singer and musician, Leonardo Cohen. The couple first met in her early 20’s and become close friends.

Currently, she is single and living in the city of Rhinebeck, New York.

Though there is no exact figure regarding Joan's net worth, looking at her successful career as an actor, author and editor she must have made a decent salary.

Joan Juliet was married to Joan Helipern, writer, and editor in Vanity Fair. The couple married in 1977 in a private ceremony. After living together for three years, the husband and wife divorced in 1980's.