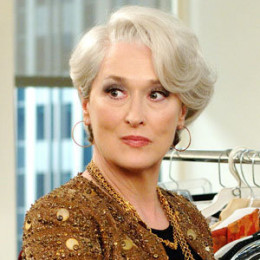 An American actress and singer, Meryl Streep is currently married to sculptor, Don Gummer. The couple married on 30th September 1978. She is a daughter in law of Dorothy Gummer and William Adolph Gummer. She is a daughter of Mary Wolf Wilkinson, commercial artist and art editor and Harry William Streep Jr., a pharmaceutical executive. She graduated from Vassar College in 1971. Silkwood (1983), Heartburn (1986) and Julie & Julia (2009) are her popular movies.

Heartburn star Meryl Streep relishes a blissful longterm relatonship with her partner with whom she shares four children. Is she dating or married to someone at present.

American actress, Meryl Streep is married to her lover Don Gummer since 1978. They shares four children. Her daughter Mamie Gummer is an actress, born on 3rd August 1983.

Meryl's third child Henry Wolfe Gummer arrived on 13 November 1979 and whereas her fourth daughter, Louisa Gummer is a model who works with IMG Models, she was born on 12th June 1991.

Meryl Streep was romantically linked to an actor John Cazale. The couple had an affair from 1976 till 1978. The cupid stayed in a relationship for two years until he died of lung cancer.

How Rich Is Meryl Streep?

The blonde haired appeared in dozens of movies and TV series to this date. For her outstanding roles in films, she's won a number of prestigious awards.

The brown eyed worked with Ol Parker and Amanda Seyfried in Mamma Mia: Here We Go Again!. 70 year old actress is enjoying a luxury lifestyle with her beau and their children in Connecticutm U.S.

Speaking of lifestyle, Meryl and her husband bought a midcentury Pasadena home. The muli Academy Award winner and her partner, sculptor Gummer are the new owners of a lavish mid-century modern home in Pasadena.

The three bedroom and three bathroom house was put on sale for $4.13 million. The cupid doesn't make to many West Coast real estate  movies, but they do own two homes in the northeast-a penthouse in 2006 and a 90 acre estate in Salisbury, Connecticut.

Meryl Streep is currently married to sculptor, Don Gummer .The couple married on 30th September 1978.They have four children.

Her daughter is an actress Mamie Gummer, she was born in 3rd August 1983.

Her second daughter is an actress Grace Gummer ,she was born on 9th May 1986.

Her fourth daughter is a model with IMG Models Louisa Gummer, she was born on 12th June 1991.