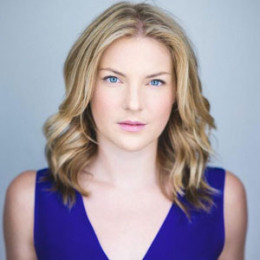 Joanne Lauren Christie, better known as Joanne Christie, is a British actress and singer. She is famous for her role in the Netflix television series, Narcos. Also, she has worked in the play Equus alongside Daniel Radcliffe and in the Broadway musical Once.

Born on 10th April 1982, Cross Lane, Huddersfield, West Yorkshire, England, Joanne Christie is the daughter of Paul and Sue. Her mother was a singer which highly influenced her in that field from childhood. She grew up along with her sibling brother, Luke, who is a musician, singer, and songwriter.

When she was 13, she was awarded a musical scholarship to study flute, piano, and voice at Oundle School in Northamptonshire. Later, she attended drama school at Mountview Academy of Theater Arts. At age 17, she joined National Youth Theater and made her debut in Immaculate Conceit. It was a play about a stripper pregnant with the next messiah.

Then she was cast in the small role in television and joined Kevin Spacey’s Old Vic, New Voices in 2005. Then in 2006, she toured in India for five months where she performed Shakespeare’s A Midsummer Night’s Dream in Jaipur.

She nearly gave up acting due to lack of work but made a come back as Jill Mason in the West End debut in Equus at the Gielgud Theater in 2007. She beat nearly 300 actresses to act opposite Daniel Radcliffe in Thea Sharrock's revival of Peter Shaffer's award-winning play.

Apart from acting, she has recorded a song, This Gift along with Glen Hansard, a music composer. The solo was released on his solo album, Rhythm, and Response which became one of her biggest honor of her life. Then she moved to Broadway and scheduled to release an album, The Year of Joy & Tears and the album is set to release in 2017.

Also, she has collaborated with Once cast members and has contributed piano and vocal at the Bowery Poetry Club for a live album recording of the Adam Brown and Friends.

Talking about Joanne’s personal life, she is currently single with no interest in making a boyfriend and fully focused on her career. She is a young and beautiful actress whose hobbies include yoga, running, Kickboxing and scuba diving.

She is really close to her mother and brother and was highly inspired by them in the field of music. She is secretive about her personal life and does not use social sites like Instagram and Twitter.

Joanna has successfully collected an estimated net worth of $1.5 million. Currently, she is living a lavish lifestyle from her earning in acting and singing.