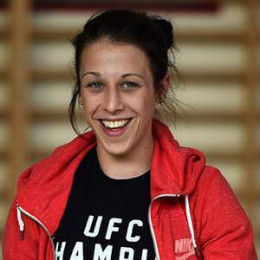 Joanna Jedrzejczyk Called off her Engagement

The current relationship status of Joanna is single. Joanna is currently focusing on her UFC fight that is about to come knocking down next year in March.

Previously, she was engaged to a football player, Przemyslaw Buta. Her ex-fiancé is also a Polish. The news of their engagement surfaced back in 2015 when he debuted her engagement with Buta in the Sport Master Gala.

It was in this event that Joanna revealed that she is engaged to Buta after dating for a long time.

At first, it looked like the pair is in for a long haul but it later turned out it wasn't. They called off their engagement due to the fact that his ex-fiance would reportedly mess up with her head before her fight. She said in an interview,

"I went through some difficulties with my ex-fiancé [Przemyslaw Buta] for almost two years. And I don't want to blame him. But man, before every fight he caused me lots of problems."

In the interview, conducted recently on October 2019, Joanna proclaims she is clear in her head and heart which means she is single at the moment.

Besides Joanna’s engagement, there has been no rumor or confirmation about her being in any relationship or having any affairs. It seems like Joanna likes to keep her personal life in a low profile.

As of 2019, Joanna's net worth stands firm at $1.5 million. As we all know, UFC pays quite a hefty cheque to all the athletes who has been working in the industry. Take, for example, Connor McGregor, whose net worth is $100 million.

She started off her career in the MMA around a decade ago and has become one of the payable athletes around. She is going to feature in the next even of UFC in March so we can say she is going to earn a lot of money from that fight as well.

Joanna J?drzejczyk was born on August 18, 1987, in Olsztyn, Poland. Regarding her nationality, she is Polish and belongs to the Caucasian ethnicity.

Joanna had been discovered when she was in her teenage while taking up fitness. She made her UFC debut back on May 19, 2012, against Sylwia Juskeiwicz. She subsequently won the match via unanimous decision.

For more, keep on visiting, MarriedWiki!!!