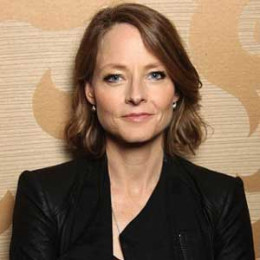 Jodie Foster is considered one of the best actresses of her generation. She received an Oscar nomination at age 12 for her role as a child prostitute in Martin Scorsese's film Taxi Driver 1976. Foster won a Golden Globe Award for best actress and Academy Award for the movie The Accused 1988.

Foster began her acting from her early age of 3, from a role as the Coppertone Girl in a television commercial for the iconic brand of suntan lotion. She continued as a child actress, with her mother always by her side.

Her first step on the big screen came with roles in a Disney movies Napoleon and Samantha in 1972 and One Little Indian in 1973. Her controversial and remarkable breakout role came in Taxi Driver (1976), where Jodie played a child prostitute who becomes the obsession of the title character, played by Robert De Niro. This role won her an Oscar nomination, making her a teenage star. Her acting in the movie landed her many roles in popular films like Freaky Friday in 1976 and Foxes in 1980.

After graduation, Foster resumed her acting career. Her renowned role in an intense and gritty picture, The Accused, where she played the role of a rape survivor Sarah Tobias, won her both an Academy Award and Golden Globe for Best Actress, making her as one of Hollywood's most esteemed actresses.

Her performance as FBI agent Clarice Starling in the blockbuster hit The Silence of the Lambs in 1991 starring Anthony Hopkins, won her the second Academy Award and Golden Globe.

After being a successful actress, she tried her fortune in directing. On February 2011, she hosted the 36th César Awards in France, and same month released her third feature film direction, The Beaver, about a depressed man, who develops an alternative personality based on a beaver hand puppet. The movie starred Mel Gibson and featured herself, Anton Yelchin and Jennifer Lawrence in supporting roles as his family. The film received mixed reviews and failed the box office.

Foster married her girlfriend Alexandra Hedison, an actress and photographer. They began dating from October 2013 and married in April 2014, in a private weekend ceremony. They are living a happy life together, with two sons from Jodie's previous relationship.

Before her marriage with Alexandra Hedison, she was in a relationship with Cydney Bernard. They met on the set of Sommersby in 1993 and began dating. The couple separated in 2008. They had two son's together  Charles "Charlie" Foster born in 1998 and Christopher "Kit" Foster in 2001.

Jodie Foster holds an impressive sum of net worth is  $100 million. She often spotted driving around in luxurious cars. Foster has an Audi A4, BMW 1 Series Convertible and other expensive cars. Well, she is living a very high standard and lavish lifestyle.

Jodie Foster married Alexandra Hedison, an American actress. They dated for a year and tied the knot in 2014.

Charles is the first child from Jodie Foster's previous relationship with Cydney Bernard.

Christopher is the second child from Jodie Foster's previous relationship with Cydney Bernard.