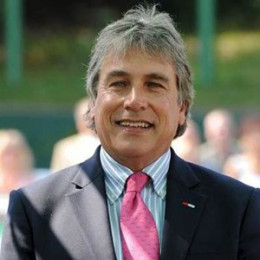 John Inverdale is a British broadcaster who works for both the BBC and ITV and has been the part of several major sporting events such as Wimbledon, FIFA World Cup, and Olympic Games and so on. Also, he aspires as a fund raiser and has been playing an advocating role for the NGOs. He is married to his wife, Jackie Inverdale since a long time and is blessed with two children.

He attended Clifton College in Bristol and earned a degree in history from the University of Southampton, in 1979. There he worked as an editor of the student newspaper Wessex News and captioned the university’s tennis team for two years.

Also, he earned a post-graduate journalism qualification from the University of Wales Institute, Cardiff and started working for Lincolnshire Echo and BBC Radio Lincolnshire in 1982.

John began his career as a radio broadcaster in BBC’s national radio station working for Radio 2’s sports during 1985. From 1990 to 1994, he worked for Radio 5 where he presented the flagship sports program Sports On 5. During the period, he became one of the main regular presenters and relaunched BBC Radio 5 Live.

In 1997, he presented the drivetime show, John Incerdale Nationwide for which he was named Sony Broadcaster of the Year. Then he hosted, Any Sporting Question at 5 Live and toured the UK each week.

From 2000-2014, he presented Today at Wimbledon, BBC Two’s nightly tennis highlights until the format changed in 2015 because of 2013 Marion Bartoli controversy which led the BBC to drop Inverdale from the show.

However, the new version of Wimbledon 2Day was hosted by Clare Balding but it was unappreciated by the viewers and a Twitter campaign called to bring back John Inverdale trended which attracted thousands of supporters. Later, he also claimed that he had never been so popular.

Later, he became the BBC’s main Rugby Union anchor in the 2006 Six Nations Championships and broadcast for 5 Live from the 2008 Olympic Games that was held in China. Also, he has headed 5 Lives’ coverage of the Wimbledon, Olympic and Commonwealth Games, Football and rugby union World Cups, World Athletics Championships, Ryder Cup, Open Championship, London Marathon and Cheltenham Festival.

Moreover, he presented the BBC’s coverage of 2016 Summer Olympics in Rio de Janeiro along with co-host Steve Redgrave. He also congratulated Andy Murray for being the first tennis player to win two gold medals.

In 2014, BBC One broadcast, he said England - rather than the Great Britain – would play the United States of America in the Divas Cup later he apologized in the program for his words. Not only this, he has during the BBC Radio 5 Live’s coverage of the 2015 Cheltenham Festival he said rose-cunted on air, in reference to glasses and swiftly apologize attributing his language to a slip of the tongue.

In 2016 Wimbledon Championships, he commented that tennis player Nick Kyrgios lumbered off like a character from The Jungle Book for which he was claimed of racism on social media, later, BBC declined to comment on the incident beyond describing the number of complaints received as small.

John is married to Jackie Inverdale and is together since many years. There is no rumor of their divorce or any other love affairs which suggest that they are happy as a family.

The husband and wife are blessed with two children but has chosen to keep their names away from the media.

Currently, he is a social worker and aspires as a fund raiser and has been playing an advocating role for the NGOs. He is also a patron of charity Cardiac Risk in the Young. He is a great fan of both Southampton and Lincoln City football clubs.

John is one of the famous broadcasters who is famous for presenting sports, conference host. As a BBC presenter and contributor, he accumulates £200,000 - £249,999 annually. Altogether, he has a net worth more than seven figures.

John Inverdale in a marital relationship with Jackie Inverdale. The husband and wife are together since many years.