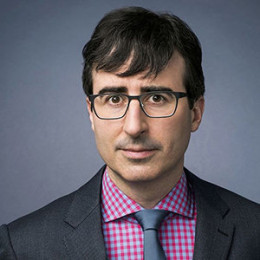 An English comedian, political commentator, and television host, John Oliver is the son of Jim Oliver, a school headmaster and social worker and Carole, a music teacher. He educated in Bedford at the Mark Rutherford School. Oliver was a member of the Cambridge Footlights, the comedy troupe run by students of Cambridge University in the mid-to-late 1990s.

John Oliver married Kate Norley, a combat medic since 2011. The couple met while the British comedian was covering the 2008 Republican National Convention for The Daily Show with Jon Stewart. Oliver worked on the Comedy Central satire program from 2006 to 2014 as its Senior British Correspondent. John and Kate welcomed their first child in November 2015.

John William Oliver was born on 23rd April 1977, in Erdington, West Midlands, England. He is the son of Carole Oliver and Jim Oliver. His father was a school headmaster and a social worker, while his mother was a music teacher. Both of his parents are originally from Liverpool, Merseyside.

Oliver finished his schooling, then studied at Christ’s University, Cambridge. During his time there, he was also a member of Cambridge Footlights, a famous theatrical club run by the students of the Cambridge University. He graduated in 1998, with a degree in English literature.

Oliver started his career as a stand-up comedian, both in the United Kingdom and the United States. He first appeared at the Edinburgh Festival Fringe in 2001 as part of The Comedy Zone. Oliver came to wider attention for his work on The Daily Show with Jon Stewart as its senior British correspondent from 2006 to 2013.

John hosted John Oliver's New York Stand-Up Show on Comedy Central from 2010 to 2013. In 2008, Oliver was given his first film role, playing Dick Pants in The Love Guru. Since 2014, Oliver has been the host of the HBO series Last Week Tonight with John Oliver. He has won six Emmy Awards and two Peabody Awards.

John Oliver is married to his wife Kate Norley. Oliver and Norley met at the 2008 Republican Convention in St. Paul, Minnesota. He was doing a piece for The Daily Show and Norley was campaigning with 'Vets for freedom'.

From that day, they started meeting often and fell in love. After dating for two years they finally got engaged on July 2010 in St. Thomas. The duo changed their relationship into holy matrimony in October 2011 just a year after the engagement.

The couple was blessed with a baby boy named Hudson Oliver on 12th November 2015. It was their first child. Oliver dished to Vanity Fair in February 2015 that he wanted his children to "speak like him".

John Oliver's net worth is estimated to be $5 million. His source of income includes his earnings from his career as a comedian, political commentator, and television host. He reportedly pockets an annual salary of $2 million.

John Oliver married Kate Norley, an Iraq War veteran who served as a US Army medic since 2011.

On 12th November 2015 that the couple had a boy named Hudson, without specifying the birth date.