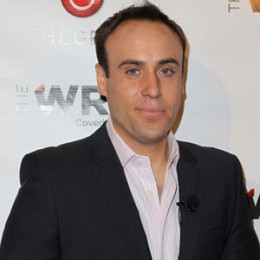 Jon Erlichman is one of the renowned journalist, TV personality plus entrepreneur. He is currently working as an on-air television anchor with Business News Network, Canada’s largest business TV channel. Erlichman is a married man. He is married to actress/comedian Caroline Lesley. They are living a happy and contented married life.

Erlichman began his journalism career working as a reporter and anchor for Business News Network (BNN) at the Canadian business news channel. He also anchored business newscasts in CTV’s Canada AM, one of Canada’s top-rated network morning show along with CTV Network and CTV Newsnet. At that time, he covered the major story like retailer Lululemon’s plan to go public on the NASDAQ.

Later, Jon joined Bloomberg Television in June 2008. He worked there as an anchor and reporter covering financial markets. He assisted spearhead Bloomberg Television’s coverage of General Motor’s bankruptcy, the Bernie Madoff fraud and the SEC’s case against Goldman Sachs.

He interviewed top entertainment industry players such as Brian Grazer, Jerry Bruckheimer, Michael Eisner, Ron Howard, David Zaslav, Jon Favreau, Vince Gillian and many others. He was the first to report the breaking news on Microsoft’s hiring of Satya Nadella as CEO and AMC’s interest in acquiring BBC America.

In September 2014, Erlichman joined ABC News covering cyber-attack at Sony Pictures, Harrison Ford’s plane crash and reported live from Dallas during Ebola crisis. In the same year, he interviewed YouTube Co-Founder Chad Hurley as a moderator at The Wrap’s annual, The Grill conference.

Likewise, Jon has interviewed and covered several popular personalities and the top stories of the world. Apart from that, he also helped launch Parachute TV, the first channel on Periscope and Facebook Live.

Caroline Lesley is the beautiful wife of Jon. Lesley is an actress plus comedian who appeared in the award winning movie Fruitvale Station. The duo tied the knot on November 16, 2007. They are blessed with two daughters.

As a journalist, television personality and entrepreneur Jon makes a decent salary. He has accumulated an estimated net worth of $300,000.