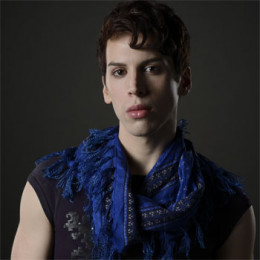 Canadian actor, Jordan Gavaris is popularly known for his role in the BBC America and Space TV series, Orphan Black for which he was even nominated for the awards. Gavaris made his Hollywood debut from the series, 45 R.P.M. in 2008. Apart from his professional life, he came out to be a gay in 2017 and is in a relationship with American actor since years.

Jordan Gavaris was born Jordan James Gavaris on 25th September 1989 in Caledon, Ontario under the birth sign Libra. Gavaris is Canadian as per nationality and is of mixed race as far as his ethnicity is concerned; his father is a Greek immigrant and his mother has a northern European descent. His parents raised him along with his two siblings.

Jordan Gavaris made his Hollywood debut from the movie, 45 R.P.M. in 2008. The movie starred Michael Madsen, August Schellenberg, MacKenzie Porter and Amanda Plummer among others. The same year, Gavaris debuted on TV from the animated series, G2G: Got to Go! alongside Gary Gerbrandt.

So far, Gavaris has worked in movies and TV series like Sea of Trees, Degrassi: The Next Generation, Unnatural History, Curse of Chucky and Orphan Black. However, he is mostly known from Orphan Black. In the series, he shared the screen with stars like Tatiana Maslany, Kristian Brunn, Maria Doyle Kennedy and Ari Millen among others.

For his amazing performance in the series, he was nominated for an EWwy Award for the Best Supporting Actor in Drama Series. EWwy Awards honor Emmy-snubbed shows.

In 2017, Canadian actor Gavaris announced he is gay. He revealed that he came out to his family when he was 19-year-old. Gavaris' coming out statement read:

‘’I’ve never been asked. I hope that one day, the world gets to a place where you don’t need to politicize your sexuality… that no one’s afraid, maybe, to come out. I do believe that jobs will be lost and I do believe jobs will be gained… Maybe not even for the right reasons.’’

He has been more active in advocating LGBT rights ever since he came out.

Gavari is in a relationship with American actor, Devon Graye who is popularly known for his role in the series, Dexter. The couple met for the first time with the help of Gavari’s co-star, Tatiana Maslany from the series, Orphan Black.

Sometime after their first meet, the pair began talking via Twitter and eventually started dating. The couple has been together for more than five years already. However, they seem in no hurry to get married.

In 2017, Gavaris accused Hollywood agent, Tyler Grasham of sexual harassment. He filed a case against Grasham for harassment and sexual misconduct.

Gavaris stated that the agent harassed him over the phone by inviting him to the dinner and even threatened him to spoil his career if he denied. After suffering many such inappropriate behaviors, Gavaris finally filed a suit against his offender.

‘’ When I was 21, Tyler Grasham repeatedly harassed me about my sexuality, and forcibly implied he could “protect me” if I joined his roster...But that if I didn't, my career may be derailed. He later harassed me over the phone when I declined a dinner invitation to the home of a notorious producer... Repeatedly accused of sexual assault of minors. Grasham would also be present at the dinner.’’

Soon after the case was unveiled in the media, many actors like Blaise Godbe Lipman, Jake Edward, and Cameron Boyce also revealed about the sexual harassment by Grasham.

The Playback Magazine’s Top Ten Watch for 2010 actor, Jordan Gavaris, 28,  stands at the height of 5 feet 10 inches (1.78m). Gavaris has an estimated net worth of $1 million stemming from his long acting career.

Even though his movies lost a lot of money; Curse of Chucky made $3.4 million while its production cost was $5 million and The Sea of Trees earned $825,577 from a production cost of $25 million, Gavaris has maintained a good wealth. His career in TV is another of his major source of income.