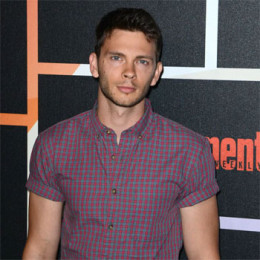 American actor, Devon Graye made his acting debut from the TV movie, A House Divided. Later he appeared in many of the movies and series like Her Best Move, Legendary, Last Weekend, Saving Grace, American Horror Story and others. Among all his work, Graye is most recognized for his role in the TV series, Dexter. He is gay and is in a relationship with his boyfriend since many years.

Devon Graye was born Devon Graye Fleming on 8th March 1987 in Mountain View, California. He is American belong to White ethnicity. Graye finished his high school from the United Kingdom. Later, he trained as an actor from San Francisco’s American Conservatory Theater.

Devon Graye began his acting career from a TV movie, A House Dividend in 2006. During the same year, he also appeared in a TV series, Dexter from which he earned much of the fame. In the series, Graye shared the screen with Michael C. Hal, Jennifer Carpenter, Julie Benz, Yvonne Strahovski, Desmond Harrington and Jamie Murray among others.

In 2009, he starred in CSI: Crime Scene Investigation along with George Eads, Jorja Fox, Marg Helgenberger, Eric Szmanda, William Petersen and so on. While working on the movie Legendary with John Cena, he took wrestling training to keep up with Cena's spirit.

As of 2017, Graye appeared in a comedy thriller movie, I Don’t Feel At Home In This World Anymore with stars Melanie Lynskey, Macon Blair, Elijah Wood, Jane Levy, David Yow, Christine Woods and so on.

Devon Graye is openly gay and is in a relationship with Canadian actor, Jordan Gavaris who is popularly known from the film, Sea of Trees. The pair met for the first time with the help of Orphan Black star, Tatiana Maslany.

Later the couple started talking via Twitter and eventually began to date each other. Today it’s been almost five years of their relationship, and still, the pair seems to be going strong.

Devon Graye, a 30-year-old handsome actor, after appearing in several series and movies makes a good amount of money but the exact figure is not public. However, his boyfriend, Gavaris has an estimated net worth of $1 million.

Among all the movies of Graye, Khumba is the only movie that collected a decent amount of $28.42 million at the box office.

He has engaged in the acting field since 2006, benefiting both financially and experience wise. Considering all the years, he contributed and his appearance in hit series, he certainly has an estimated net worth not less than a million.