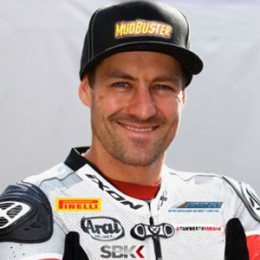 Josh Brookes is a professional Australian motorcycle road racer who has experienced Superbike and Supersport racing, both nationally and internationally. He came to limelight after he won the 2004 World Supersports. Josh has won biggest challenges including 2008 Championship Supersport World Championship and 2015 Championship British Superbike Championship.

Josh Brookes was born on 28th April 1983, Sydney, New South Wales and was raised by his parents in Western Suburbs of Sydney. He belongs to the Caucasian race.

From childhood, he was passionate about bike riding and wanted to pursue a career in the same field. Soon he began his career as a motorcycle road racer and participated in the World Supersport round at Philip Island as a wild card. Luckily, his first match became his pathway towards the racing world after he won the race.

The following year, he returned to win Australia’s Superbike and Supersport title in 2005 where he rode a Honda. Then he moved to World Supersport with a Caracchi Ducati, but he left the team in the middle of the session, ranking 6th at home round.

In 2006, he joined Bertocchi Kawasaki in the Superbike World Championship in Italian round held at Mugello. Also, he participated in the race held at Netherlands where he placed 4th in a wet race. It was the first time that he had been in Europe.

During the period, he became good friends with Karl Muggeridge and gained new investors, a switch Honda Fireblade bikes. He even joined the Stiggy Motorsport Honda team in the Supersport World Championship for the final five rounds and continued with them in 2008. He won for the second time at Donington Park and made a one-off appearance in the British Supersport Championship for HM Plant Honda where he qualified on pole and finished third.

Then in 2009, he switched to British Supersport Championship with HM Plant Honda along with fellow Aussie Glen Richards. In the round 3 at Donington Park, he collided with Sylvain Guintoli due to brake failure on the sighting lap on the way to the grid breaking a leg of the Frenchman. He claimed the cause of the accident was brake failure which if proven could have made Honda liable for the incident. So they didn't support him. Hence he was suspended for one race.

Josh again was involved in another controversy at the Mallory Park: as he was running fourth, suddenly he lost control of the bike and crashed with the leader Simon Andrews. Brookes also sustained a broken thumb from the accident. In the event, the Honda’s engine case broke, spelling oil on the track that caused five other riders to crash. After the game was over, Josh apologized in a TV interview program for his great mistake.

The GSE Airwaves Yamaha boss Colin Wright made a decision and told a Eurosport TV interview at Brand Hatch that he wanted to sign Brookes for 2010. Somehow, Josh stayed with the HM Plant Honda team in 2010 and changed to bike #4 and joined former double British Superbike Championship Ryuichi Kiyonari.

With the hard work and dedication towards his dream, he took his first win in the fourth race of the season not only this; he even won at Cadwell Park and two wins at Snetterton. The season was closely documented in the movie I, Superbike directed by the filmmaker and biker, Mark Sloper, in 2011.

In 2012, it was announced that Josh would compete at the 2013 Isle of Man TT Races. Being one of the high-profile newcomers along with Steve Plater, he competed for Tyco Suzuki in the Superbike, Superstock, and Senior category.

Also, he has made his entry in a British Superstock entry in the MotoGP support round at Silverstone and a World Superbike at Phillip Island. The same year, he switched to the Relentless TAS Suzuki team joined by Alastair Seeley who is a competing in British Supersport.

Furthermore, he raced in the Milwaukee Yamaha YZF-R1, where he won the British Superbike Championship in the final round of the season at Brands Hatch and also finished third in the championship standing abroad a Yamaha in 2017.

Josh is currently single and is not interested in being in a love relationship. He is focusing on his career rather. It looks like he wants to achieve great success before making any girlfriend and settling down.

He actively participates in social sites including Tweeter and has over 70.6k followers.

This 34 years old racer has taken part in a lot of championship races and has won 2008 Championship and 2015 Championship till now. From the game, he has earned popularity and cash as well. His actual net worth is not yet revealed but his life style suggest that he probaly has a worth not less than six figures.