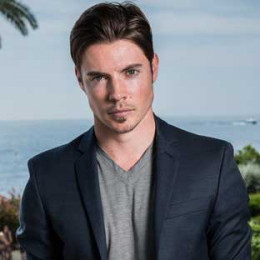 The handsome actor, model Josh Henderson is single now after a long list of affairs. The hot star, Josh has a massive female fan following. He has 128k followers on Instagram and 112k followers on Twitter. Josh was nominated for the Outstanding Performance by an Ensemble in a Comedy Series by Screen Actor Guild Award, 2006.

Josh Henderson was born on 25th October 1981 in Dallas, Texas. He was born to mother, Sharon Lea Henderson and she raised him as a single parent in Tulsa, Oklahoma. He has two younger siblings (sisters), Hannah and Chelsea.

Josh completed his schooling from Memorial High School in 2000 and graduated from Tulsa Memorial High School. He was superb in sports, mainly basketball, during his college time. Henderson is a heterochromia, (having two different eye colors) , left one is green and right one is blue.

Josh competed in the second season of WB reality show, Popstars and won a spot in scene 23. After that, he went on to improve his career in acting, modeling, and recording too. Henderson latterly appeared in various television sitcoms like- 8 Simple Rules for Dating My Teenage Daughter, One on One, Maybe It's Me, and Rodney.

Leeches (a horror movie) was his debuted film. After that, he worked in the movie, The Girl Next Door. Furthermore, he acted in many drama- series like- Over There, Desperate Housewives, Dallas, North Shore and many more. John gave an incredible performance in the movies like- Set Up, Fingerprints, April Fool's Day, The Jerk Theory. He gave his voice to the movie, The Jerk Theory.

Josh also worked in the series, TNT revival in 2014. Moreover, in 2015, he was cast in the E! pilot The Arrangement opposite to Christine Evangelista.

The dashing model/actor, Josh's salary per episode in Dallas is $50,000 and has an estimated net worth of $2.5 million.