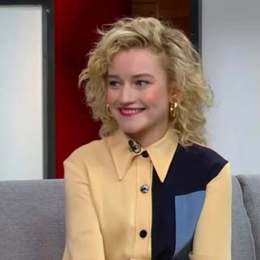 Famously known actress, Julia Garner is an award-winning American actress better known for working in the 2017 Netflix series named Ozark. She is also popular for working in the movies like We Are What We Are, Not Fade Away and many more. The 25-year-old actress is also recognized for working in the television series including The Americans, Girls, and Dirty John.

Garner won the Boston Globe, Best TV performances award in 2017 for her works in the television screen.

Personal Life of Julia Garner; Is she Dating Someone?

Julia Garner is possibly out of datings and relationship as of now. The 25-year-old actress is believed to be single and well-focused on her career. Moreover, she is a private person regarding her personal dating life and avoids media attention when they ask for her relationship's status.

The Netflix actress is out of any previous and present dating rumors and it seems like she is waiting for her love of life. Further, she is focused on her career and is never spotted with any men in any events and Award shows.

Garner loves to go on vacations whenever she is free from her acting life. As seen in her Instagram account, she prefers to spend time with her friends and goes on many places with them.

What is the Net Worth of Julia Garner? Also, Know about her Career:

Julia is an active person when it comes to using social media networks. She uses many media platforms including Instagram and posts many promotional posts regarding her professional life. Additionally, she earns over $650.25-$1,083.75 per post from her Instagram account.

Garner started her acting career by working in the theatrical play at the age of 17 in Sean Durkin's Martha Marcy May Marlene with a role of Sarah. In an interview, she explained her career starting by saying;

I started doing student films at Columbia grad school, and this one student filmmaker, his girlfriend was interning at an open casting call for Susan Shopmaker. Later on, she did the stage reading for Martha Marcy May Marlene, then she cast it, and that was my first movie.

In 2012, she was offered to play a small role in the movie named Not Fade Away directed by David Chase. Since then, she worked in a number of famous television series including The Americans, Girls, The Get Down, and Modern Love.

On the other hand, Julia also tried her luck in the film industry by appearing in the 1010 short film named The Dreamer. She is currently working in an American drama film named The Assistant which will be premiered in 2020. Besides, she is a part of many popular movies like Tomato Red, Not Fade Away, We Are What We Are, Electric Children and many more.

Ozark panel last night with the brilliant casting director and my dear friend #ALEXAFOGEL! She casted @Ozark and so many beautiful projects. What an eye she has. Xo