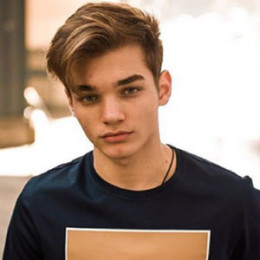 Germany pop singer as well as a YouTuber Julian Martel began his career on YouTube in December 2014, where he has gained a large number of subscribers. He is a member of the boy band, New District since 2016. Other than that, being a social media star he has gained massive followers.

Does Julian Martel Have a Girlfriend?

The 18-year-old Julian Martel exactly hasn't spoken out regarding his relationship status or girlfriend. Nevertheless, the artist seemed very happy in the picture he's shared on 31 December 2017 with a girl.

Martel is a tight-lipped person when it comes to opening up his personal life openly in front of the media. He has a number of male and female friends with whom Martel posting various photos.

The "Get Over It" singer is just nineteen years of age and there are a few more years for him to get into romantic relationships. He is currently focused on building his career rather than hanging around with girlfriends.

Julian Martel has accumulated an estimated net worth of $800 thousand.  He earns a good sum of the amount from his singing career. He makes $40-$60 thousand per annum as a singer.

Walking into his lifestyle, Martel drives a white Mercedez Benz car which costs around $124,500. The singer showed off his new automobile via Instagram on December 22, 2019, standing aside from it. He is fond of old, vintage classic Bentley Continental car.

Below, we present you a video of Julian Martel Talks about her single, 'Get Over It', with 102.7 KIIS FM

According to his Instagram photos, Martel loves to travel and likes to explore new things in the meantime. He is also an avid dog lover.

Julian Martel’s career started with a self-titled YouTube Channel which he opened on 29th December 2014. However, he uploaded his first video, a cover song of Ed Sheeran’s Thinking Out Loud, three months later.

In the following months, Martel uploaded covers of Shut Up and Dance, If I Could Fly, Pillowtalk, Walk the Moon, and many more. He also released a cover of ‘Words’ by American singer and songwriter Jacob Whitesides. Jacob loved his performances, which Jacob tweeted the YouTube link to the song.

In 2015, Martel appeared as a contestant on the third season of ‘The Voice Kids Germany’, however, he did not reach the final round. He was also the part of a boy band ‘Level X’ and they launched a cover of ‘What Makes You Beautiful’ by One Direction’ in May of the same year.

In 2016, Julian Martel joined the Musical group, New District with Sean Cavaliere, Jaden Bojsen, Devin Dressman, and Dylan Rey. He replaced the Felix Biernat because Biernat couldn’t relocate to the US because of his visa issue.

The first recording of Martel’s with the Band, New District was single, ‘Ain’t Got Money’, released on 9th August 2016. The song earned more than six million views on YouTube to the date, and they also nominated under the Teen Choice Award for Choice Music: Next Big Thing in 2017.

In November 2017, Martel released an original single, ‘Get Over It’. The following year, he launched another single, ‘Goodbye’.

Julian Martel was born on 23rd February 2000, in Germany under the birth sign Pisces. She belongs to Caucasian ethnicity and holds German nationality. This charmful German musician stands at a height of 5 ft 9 inches and weighs 55 kg.

During his childhood days, Martel developed an intense passion for singing and also began to music classes. Currently, he is in high school. Martel developed his interest in music in his early childhood and was inspired to pursue it as a profession Canadian singer Shawn Mendes and English Ed Sheeran.