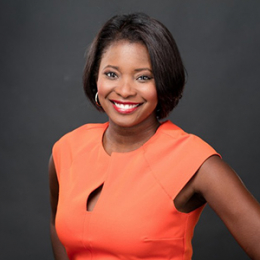 Jummy Olabanji is one of the beautiful journalists in the country. As of now, the star is serving as an anchor and reporter in NBC Universal Media, LLC. NBC Universal is the place where she first started her career as an intern.

Jummy Olabanji Is A Married Woman. Know More About Her Wedding And Husband

As the heading itself says that Jummy Olabanji is already married. She is married to Darren Sands in 2017. Like Jummy, her husband is also a journalist.

When it comes to her wedding, it seems like the star had a beautiful ceremony which was held in June 2017. For the ceremony, she went for a white lace gown with no sleeves and the embellished belt. Diamond earring, bracelet, and the bouquet completed her look.

Meanwhile, the groom went for a black suit which he teamed up with a black bow and white shirt. Moreover, at the wedding, bridesmaids were in blue and the best men were in black.

It’s only taken 9 months but I’m finally ordering prints! Can’t wait to frame this one! : @masterwilliams

Well, the now husband-wife couple met for the first time at college journalist boot camp. At first, they became friends and eventually started falling for one another.

After dating for months, her boyfriend turned husband proposed her on the top of the Newseum and guess what she said yes.

One. More. Week. From meeting at college journalist boot camp to getting engaged on top of the @newseum. Buying our first dream home in Virginia to turning around to sell it a year later. New jobs. New cities. Same love and support. Can't wait to make this thing official next week!!! Marrying my best friend surrounded by our best friends and family! Party time!!! #UnitedWeSands #BandsForSands #readyforhoneymoon #wetired

They are together for years but has no children yet. On top of that, they are still free from any kinds of divorce rumors.

Jummy Olabanji Net Worth and Salary

Jummy Olabanju has the net worth of not less than $500 Thousand. Her journalism career is her main source of income. Currently, Olabanji is working at NBC Universal as an anchor and reporter. Moreover, a reporter from the show makes the average salary that ranges from $38221 to $59968.

Get To Know More: Sunny Hostin

The star, moreover also worked in WJLA. A reporter or anchor who works at the station makes a salary of $132,719-$139,132. She also served at several other places including CNN. With such amazing earnings, Jummy is living a lavish life along with her husband.

Hanging on the 4pm with my girl @natalienews! Will miss our daily coffee/tea/decaf breaks girl friend! Xo

Apart, Olabanji and her husband bought a house in Virginia but they sold it a year later. As of now, they reside in Manhattan, New York.

Last weekend newscasts of 2018! Flying solo while @akuperstein enjoys a few days off! Thanks for tuning in and making us the most watched weekend late night news. See ya in 2019! Golden Globes next Sunday night!

Click marriedwiki.com to know more about your favorite celebrity.

Jummy Olabanji is married to journalist Darren Sands in June 2017. The couple got engaged at the top of Newseum after dating for months.