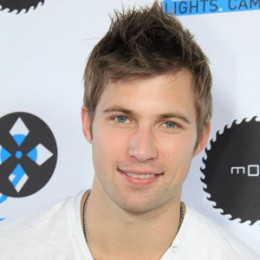 An American model and actor, popular from a television series 90210 and Drop Dead Diva, Justin Deeley is currently single. He is a model and popular for his underwear ads. Justin has played the recurring role of California cowboy Austin Tallridge in the fourth season of The CW's 90210. Justin first movie is Rosewell: The Aliens Attack, he has the role of Soldier #2.

Justin Deeley is in a relationship with his actress girlfriend, Christina Scherer. They mostly post their pictures on social media.

“Love is not love Which alters when it alteration finds, Or bends with the remover to remove. O no, it is an ever-fixed mark That looks on tempests and is never shaken; It is the star to every wand'ring bark, Whose worth's unknown, although his height be taken." (Sonnet 116) William Shakespeare

Even if they speak no words about their relationship, their Instagram posts say everything.

Justin Deeley's assumed net worth is not less than $500k. Till the date, he worked in numbers of movies and TV series from where he definitely makes a good net worth and salary.

Justin Deeley was born on 1st February 1986 in Louisville, Kentucky. He is American as per nationality. Justin graduated from the University of Louisville.

Deeley has also worked in television series, Lost Tapes is his first televisions series, he has the role of Tyler. His popular movies are Geography Club (2013), Couples Retreat (2009) and The Wicked (2013). Justin has an older brother named Blake. He is not a controversial star and there is no information about his affairs in social sites.

Stay tuned to Marriedwiki for interesting celebrity-related Gossips and Entertainment!!!