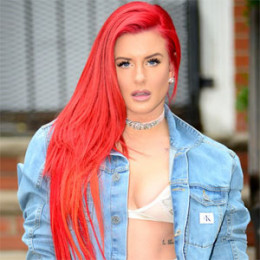 Justina Valentine, a native of Passaic County, New Jersey, is an American rapper, singer, songwriter and also a model. Her singles, Bubble Gum and Hip-Hop Joan Jett went viral on YouTube gaining her fame. Some of her best-known singles include ALl the Way and Candy. Questions were raised about her sexual orientation; rumors surfaced suggesting she could be a lesbian. So far, she has not addressed the rumors.

Justina Valentine was born on 14th February 1988 in Passaic, New Jersey under the birth sign Aquarius. Valentine is American as per nationality, and as far as her ethnicity is concerned, she is White. She is the daughter of a musician father who was a lead vocalist and played a number of instruments.

From an early age, Valentine learned music and dancing and loved hip-hop. She was never shy to perform in front of mass. From 2006, Valentine started recording her own music.

In 2012, Justina Valentine released her first mixtape named, Route 80. Her singles, Bubble Gum and Hip-hop Joan Jett went viral on YouTube. A year later, she released her EP, Valentine which listed on the iTunes R&B Charts.

Me & my bro @romeomiller takin over your TV screens tonight to host the Ex on the Beach reunion U won’t wanna miss it There’s drama, beach bodies, & a coupla people even caught crabs TONIGHT 8pm on @mtv  #MTV #ExontheBeach #EOTB

In 2016, Valentine released her first studio album, Scarlet Letter. The same year, she appeared on the 8th season of Wild ‘N Out on MTV opposite Nick Cannon, Rasika Mathur, Tyra Banks, Deezy and Wayne Brady.

Like many other celebrities of Hollywood, Justina Valentine also keeps information regarding her love life to herself. Till date, she hasn't made any of her affairs or boyfriends public.

Due to her secretive nature, rumors circulated about her sexual orientation. Also, her Instagram post, a picture kissing fitness model, Sommer Ray on the set of MTV's Wild ‘N Out raised more eyebrows towards her sexuality. However, Valentine has not yet come out as bi or lesbian. At present, the Bubble Gum singer is possibly single.

Justina Valentine, 32, might have an estimated net worth of $750k, as of 2017. The majority of her income is from her career as a rapper, singer, and songwriter.

She has self-titled YouTube channel, Justina Valentine, as of 2018 she has more than 68k subscribers and over 7 million views. She earns $1.3k to $21.5k yearly. Also, the average salary of the model in the US is $97,134 annually, Valentine being a model may earn somewhere in the same range.

She also runs her own chain of merchandise and sells the different design of T-shirts, crop top, tee, mugs. The price of her t-shirts ranges from $19.99 and $10.00.

Check out the 60-second Interview of Justina Valentine,