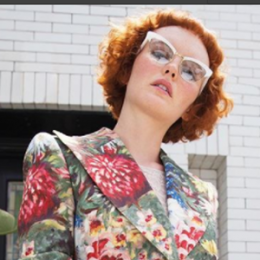 American model and singer-songwriter, Kacy Hill is currently working with Kanye West’s GOOD Music. Hill began her career as a model from American Apparel before pursuing a career in singing. She has also worked as a dancer on The Yeezus Tour for Kanye West. Hill currently is rumored to be in a relationship with a guy; she often shares pictures on her social site.

Kacy Hill was born Kacy Anne Hill on 1st May 1994 in Phoenix, Arizona under the birth sign Taurus. Hill is American as per the nationality, and as far as her ethnicity is concerned, she is White.

She completed her schooling at Arizona School for the Arts. From a very early age, Hill was interested in music and used to play oboe and saxophone.

Kacy Hill’s modeling career began after a wedding photographer discovered her at the age of 16. Hill then moved to LA and became the face of American Apparel, a North American designer clothing manufacturer. She has also appeared in a controversial ad of the Appeal which was later banned.

Hill was not satisfied with her modeling career, so she shifted to dancing and singing. In 2013-14, she appeared as a backup dancer for The Yeezus Tour, a concert tour by rapper, Kanya West. In the same year, Hill released her non-album single, Experience and signed a contract with GOOD Music.

Hill has posted several pictures on her Instagram with a guy named, Jim-E Stack. They seem to enjoy each other's company. Looking at the pictures, they ''surely have something going on between them.''

But, the couple still has not disclosed any information regarding their dating life so, she is possibly single at the present days.

HBD to you, my love

Like many other Hollywood celebrities, Hill is also very private about her romantic life and other personal life details. She prefers to keep such information away from the media and public.

In 2010, Hill appeared in a controversial ad which was banned for appearing to sexualize a child. She wore a thong suit facing backward showing her buttocks.

She is currently dating her boyfriend Jim-E-Stack. She clearly stated her relationship with the guy via Instagram posts.

Kacy Hill, 24, is currently signed to Kanye West’s GOOD Music. Hill who began her career from modeling has an impressive net worth for someone her age, Kacy Hill has an estimated net worth of $1 million, as per some online sources. However, the figure isn't coming from an official source.

American Apparel provides an average salary of $57k to their models. Hill modeled for the brand and even appeared in an ad, meaning she made way over $57k.

Also, she has her own YouTube Channel that has more than 10k subscribers and thousands of views as of 2017. From the channel, Hill earned $149 to $2.4k yearly which contributes to her net worth.