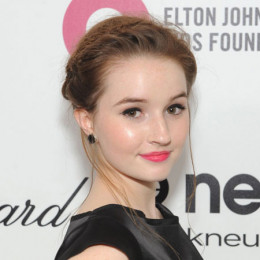 An American actress who is better known for her role as Gwen Thompson in the film An American Girl: Chrissa Stands Strong. She is the daughter to Kathy and Tim Dever. Since she had a keen interest in acting from a very young age she was sent to acting school by her parents. she started her career starring in number of commercials. In 2009 she debuted in film industry. In 2011 she was also casted in FX series Justified. She has starred in TV series like Modern Family, Private Practice, Party Down, The Mentalist, Make It or Break It, and Curb Your Enthusiasm. In 2011 she was seen in couple of movies like Cinema Verite and Bad Teacher. She is also co-star of 2014 movie Men, Women & Children.

Kaitlyn Dever has never been married to date. Nonetheless, she was rumored to be dating actor Ansel Elgort after spotted sharing a romantic kiss in the 2014 movie “Men, Women & Children”

However, the couple turned down the rumor telling it was just for the movie and they are only good friends.

Currently, she is possibly single. Since she has not married yet there is no question of facing divorce. The Bad Teacher actress is just 22 years old and she's more focused on building her career than having affairs and boyfriends.

Dever has an estimated net worth of about $1 million as of 2019. The main source of her earning is from her career as an actress. Dever appeared in a number of movies and television series to date. She makes $35-$70,000 per episode for appearing in series and $50,000-$200,000 per movie. She worked with Rachel Keller and Robin Tunney in the notorious series The Mentalist.

Dever is famous for her role as Gwen Thompson in the American Girl film An American Girl: Chrissa Stands Strong in 2009. Some of her TV credits include Last Man Standing along with Tim Allen, Make It or Break It, Modern Family, Party Down, The Mentalist, and Private Practice. She's set to perform in a miniseries Unbelievable in 2019.

Kaitlyn Dever was born on 21 December 1996 in Phoenix, Arizona to Kathy Dever and Tim Dever. She was just five when she showed her interest in acting and performing arts. As a child, she also participated in gymnastics, skating, and ballet.

For more celebrity biographies, keep coming back to Marriedwiki.com