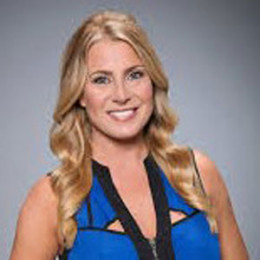 Kaitlyn Vincie is a sports presenter and journalist, well known for her work in the Fox NASCAR team as a reporter, where she contributed to pre-race shows and NASCAR Race Hub. While she was working for Langley Speedway, she first rose to fame for uploading the self-made NASCAR videos on YouTube.

Kaitlyn Vincie was born on December 10, 1987, in Harrisonburg, Virginia, the United States of America. She is the daughter of Margaret Vance and John. She was brought up firstly in Bridgewater before her family went to Warrenton.

Kaitlyn also has a brother. Regarding her ethnicity and nationality, she is white American. Her grandparents worked in school and colleges. Her grandmother, Eleanor N. Logan, was a primary teacher whereas her grandfather was a member of the Bridgewater College.

Moreover, she developed an interest in journalism from her early age. She got her early education from Fauquier High School in the year 2006. She earned her degree in the field of communications from the Christopher Newport University.

Early in her career, Kaitlyn worked for the school's wrestling team as a manager for four years. Currently, she is famous for her work on Fox NASCAR as a reporter since 2014. Besides, she also worked for Langley Speedway.

In the year of 2010, Vincie auditioned for Miss Sprint Cup but didn’t make the final round. Moreover, she is presently working for FOX NASCAR and NASCAR Race Hub along with Wendy Venturini, Jamie Little, and Danielle Trotta.

Kaitlyn has managed to hide her personal life from the social networking sites altogether. She is believed to be married and has posted many pictures with a guy named Blake. He maybe her husband or possibly her boyfriend.

Vincie recently posted a lot of pictures with Blake on her Instagram page. Furthermore, the couple also revealed in one of her Instagram shot, in which they have hinted becoming parents of their baby within 13 weeks.

Kaitlyn is earning a handsome salary from her journalism career. Her net worth is believed to be more than $2 million. But it’s not an official figure.

She stands at the height of 5 feet 7 inches and has an extremely light brown hair and hazel eyes.