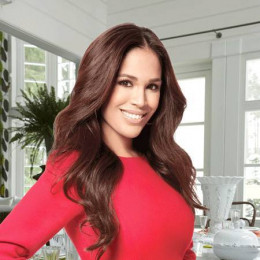 She is a Mexican TV presenter and host best known for the show Control which she hosted from 2000 to 2006. She currently is associated with the Univision Network as a co-host on the morning show Despierta América. With a degree in electronic media, she graduated from the University of Texas at El Paso. She started her career in 1995 with KNIT-TV, Univision’s El Paso, Texas affiliate.

Karla Martinez was born in Ciudad Juarez, Mexico and she grew up in Texas. She completed graduation from the University of Texas at El Paso with a degree in electronic media.

Martinez is best known for hosting the show Control. She worked in the network from 2000 to 2006.

She started working at KINT-TV Univision's El Paso, Texas affiliate in 1995. People en Espanol named her one of its 25 Most Beautiful People in 2002.

At present, she is working as the co-host on the popular show called Despierta America on the Univision Network. She has a memoir named El Poder de una Sonrisa.

She interviewed many famous faces including Wisin and Selena Gomez.

Martinez has an estimated net worth of about $10 million.

She had a cancer scare in 2015. She made a confession that she was so scared when she was waiting for her biopsy when a small lump appeared on her right breast.

She shared her experience to empower women and get mammograms timely and stay healthy.

He is an Engineer by profession who is very supportive and positive towards her wife and her job.

She is the first child born to Martinez. She was born safe and sound.

She is the second child in the house who was born healthy.