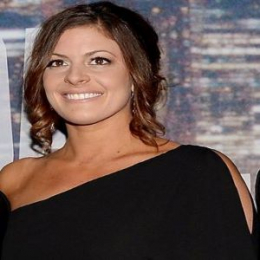 Karly Skladany is the wife of NSYNC singer Chris Kirkpatrick. The couple who is married for five years is blessed with a child in 2017. Karly is currently enjoying her motherhood.

Karly Skladany is married to NSYNC singer Chris Kirkpatrick since 2nd November 2013. The couple tied the knot at the Loews Hotel in Orlando, Florida in attendance of Chris band members which include Justin Timberlake, Joey Fatone, J.C. Chasez, and Lance Bass. Justin Timberlake was joined by his wife Jessica Biel. 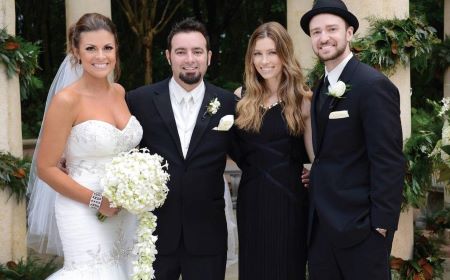 Karly Skladany with her husband Chris Kirkpatrick and friends Justin Timberlake and Jessica Biel on her wedding day.
SOURCE: digitalmag.rangefinderonline

On an interview with magazine People, Chris talked about his wedding day and stated:

“Justin and Joey were giving me wedding advice. Justin was like, ‘You’re going to be a little bit nervous here, but it’ll be okay. It was really funny.”

“I’m the oldest one of us, and I never thought I’d be getting wedding advice from Justin Timberlake! They made things seem really normal.”

The couple first met in 2010 and got engaged in October 2012 in Italy. Chris said in an interview that engagement was in the spur of the moment but it was spectacular. He stated:

"We had a hotel room at the Isle of Capri, overlooking the Mediterranean. It was one of the most beautiful places I’ve ever been. And it hit me: I wanted to propose to Karly. So I ran to a jewelry store, found the perfect ring and bought it.”

After four years of marriage, the pair welcomed their first son Nash Dylan Kirkpatrick on October 10, 2017. The couple is still going strong without any rumors of breakup or separation.

What is Karly Skladany's Overall Net-worth?

Karly Skladany is currently busy attending her 20 months old baby and enjoying her motherhood. So, her independent net-worth is not available. However, she shares the net-worth of her spouse Chris Kirkpatrick which is reported to be  $13 million.

Somehow the Easter bunny found us way up in the Smokey mountains! Happy Easter everyone!

The co-founder of NSYNC earned a substantial amount early through the success of the band and continued to increase his wealth by working voice-over actor in shows such as The Fairly OddParents. On average a voice actor earns $51,000-$90,000 yearly.

The couple recently sold their five-bedroom Florida home for $ 1.69 million in 2018  and they currently live in Nashville, Tennessee.

Karly Skladany was born in 1984 to father Tom Skladany and mother Debbie Skladany. The details of her family are not disclosed in the public yet but judging from her Instagram, she grew up with two sisters. She often shows love for her family through sweet messages on her Instagram.

Happy 40th Anniversary to my amazing parents!! 40 years is a long time!!! Thank you both for setting the best example of what love really looks like to all of your girls!! I hope you have lots of green beers today to celebrate!! Love you so much @dskil6 @skladanytom

Skladeny is of white Caucasian ethnicity with height 5 feet 8 inch. His hair color is blonde and eyes are light brown in color.

Chris and Karly got engaged in Italy and tied the knot with attendance of NSYNC members and other 300 guests.

Nash is the first child of Chris and Karly. He was born on October 10, 2017, in Nashville, Tennessee.