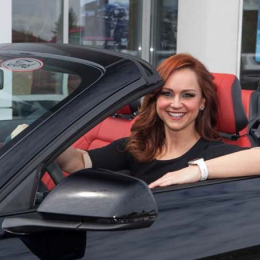 Popular Television personality, Kate Beirness is a famous sportscaster, sports anchor, and sports reporter. She is well recognized for working in the TSN network's show Sportscentre. The 35-years-old sports anchor is also known as the ex-anchor and ex-reporter of the sports network's shows like Barrie and Roger TV First Local. Besides, she founded her Mark summit which is an annual one-day event based on empowering Canadain females leaders of the next generation.

Kate Beirness's Personal Life; Is she Dating Someone?

Kate Beirness is possibly single and out of any dating relationship at the moment. It seems like, the Canadian sportscaster is still waiting for a dream man. Besides, she is focused on her career and is never spotted with any men out of the reel life.

Kate falls into a controversy when her co-host Darren Dutchyshen from the Sportscenter once tweeted saying Kate was getting married in 8 days in Mexico. Here take a look at the tweet;

@KateBeirness is getting married in 8 days in Mexico. It's because she can't get married in Canada. #criminalbackround

Kate, on the other hand, replied saying;

"All lies! well not the wedding, but definitely the record part."

Beirness is currently out of any rumors and is believed to have a clean list when it comes to being in a relation. Well, she is private and does not share much about her personal life and relationships in the media. Moreover, she is an active person on social media and shares a lot of posts regarding her personal and professional life.

The famous anchor is praised and loved her work in the Sportscenter show and holds stunning physic with the addition of a beautiful face. Further, she loves to go on vacations whenever it is possible and as being a fitness lover, prefers to spend her time in the gym as well.

How much Net Worth Does Kate Beirness hold? Also, Know About Her Career

The TSN sports anchor is an active person on Instagram where she posts many promotional and personal pictures and videos. Additionally, she earns over $309-$515 per post from her Instagram account. Here, take a look at the photo she shared on Instagram in her studio;

Whatcha looking at AD? Never seen a unibrow before? #thebrow

The 35-years-old television sports personality started her career by working as the sports reporter for the Rogers TV First Local. Later, she joined at the virtual channel 3 of the CTV 2 television system named /A\ Barrie as a sports anchor. Further, she is currently working as a host for SportsCentre on TSN. After joining TSN, she initially worked along with Bryan Mudryk on the Weekend Sportscenter and continued to do so until July 2013. Finally, in October of 2013, Beirness started working with the co-host Darren Dutchyshen in the late night and morning loops sports on TSN.

Kate on the other hand also works in annual events. In the July 8 of 2017, she founded and hosted Her Mark summit at BMO Field Toronto, ON which is an annual one-day event. The event aims at empowering the next generation of Canadian female Leader around the country.