Home Article Sportscaster Kate Beirness is Married? Who is her husband?

Sportscaster Kate Beirness is Married? Who is her husband? 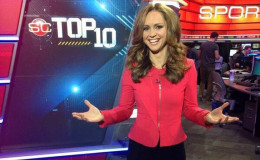 Kate Beirness, who has won the hearts of millions of fans, is an exceptionally beautiful sportscaster, working as the host for Sports Center, TSN. Her professional life has reached high levels of success but her private life is still a mystery to the world.

As charismatic as she is on screen, we are sure she is also very wonderful in person. Her loyal fans are really curious to know more about who the real Kate is and about her affairs and dating profile.

It's obvious to think that this young and pretty sportscaster with dazzling personality would be too good for settling down, but as per her posts on Twitter back in 2012, her co-host, Darren Dutchyshen tweeted that she was getting married in 8 days.

@KateBeirness is getting married in 8 days in Mexico. It's because she can't get married in Canada. #criminalbackround

It's unbelievable, but it's true. However, there has not been much information regarding her wedding back in 2012 on the web and also identifications of her husband is still unknown.

It seems Kate has put the media in a really mysterious puddle.

As for now, all we can say is that she is a happily married woman who is living a wonderful life with her loving husband.

It seems as they do not want any media attention or intrusion in their well-balanced life and are content with their simple and normal life.

Kate was born and raised in Port Perry Ontario and was graduated from the University of Ontario Institute of Technology. Born in the house of teachers, John and Chris, Kris was a passionate basketball player and wanted to play in WNBA, but her career took her to a different path and she landed up being a sportscaster.

Born in the house of teachers, John and Chris, Kate was a passionate basketball player and wanted to play in WNBA, but her career took her to a different path and she landed up being a sportscaster.

There is only 1 MIP... it’s SPICY  P! Soooooooo spicy! #WeTheNorth

Before working in TSN, Kate who is now 32, worked for Rogers TV First Local as the sports reporter, and on /A\ Barrie as the sports for more than two years, and eventually, she got the chance to work for TSN in December 2009.

Since then, she has hosted a number of marquee events, including TSN Olympic Morning, March Madness, and NBA Draft.

Recommended: Sportscaster Michele Tafoya and husband Mark Vandersall's Married life. Do the couple have any children?

Talking about her hobbies, she is still a regular basketball player and makes time for a game every week. She is a fitness freak and also serves as Ambassador of Under Armour and Biosteel.

Her travel diaries are difficult to keep up with as she travels a lot and recently she went on a trip of a lifetime with the Canadian Armed Forces in Kuwait, France, and Ukraine.

She has posted a lot of photos of her working out and playing basketballs on social media sites.

TSN anchors and Sports Centre co-hosts Kate Beirness and Darren Dutchyshen were in Wallaceburg on Friday, July 19, 2011, as part of the 2011 TSN Kraft Celebration Tour.

Here is the video of them talking about Wallaceburg (Chatham-Kent) and the competition they have with Trenton, Ontario.

She is a very successful and hardworking person and we would like to wish her to have a great life ahead with her husband and family.