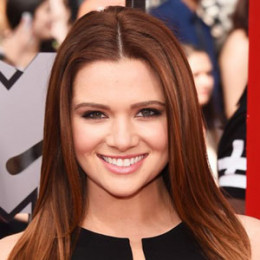 Katie Stevens is an American actress and singer who gained name and fame after participating in American Idol 2009. The incredible singer is in the relationship with guitarist Paul DiGiovanni.

Stevens studied at Pomperaug High School and also was a member of School’s varsity swim team for four years. At the Greater Watertown Scholarship Pageant, she was named the 2009 Westbury Outstanding Teen.

Katie began performing when she was only five. She sang the national anthem at a party for a politician at that time. At the age of seven, she performed From This Moment On at an aunt’s wedding. She then began performing in local theatre community like BSS Children’s Theatre and Main Street Theater’s production of The Wizard of OZ.

Afterward, she appeared as Sharpay in High School Musical followed by The Cat in Honk.  She went on to perform in Pomperaug High School's South Pacific and at Carnegie Hall.

Stevens gained popularity when she entered the American Idol singing At Last on August 13, 2009. Her performance landed up to top 9 positions in the competition. Furthermore, she made her appearance on several talk shows such as The Ellen DeGeneres Show, Late Show with David Letterman and Wendy Williams Show.

Also, Katie has written nine songs till November 2010. The same year she appeared on Idolos Portugal as a guest performer singing All I Want for Christmas Is You. She got the title role in Todrick Hall’s  YouTube sensation Beauty and the Beat. Likewise, she played a role on the MTV scripted comedy Faking It. In 2015, she was cast in CSI finale movie Immortality. After that, she featured in the Freeform show The Bold Type.

Katie is in love with guitarist Paul DiGiovanni. The duo began dating in early 2014. She loves and adores the time spent with her boyfriend very much. In their free time, they often go boating in Tennessee.

As an actress, Stevens makes a lucrative amount from her career. She holds the staggering net worth of $6 million.