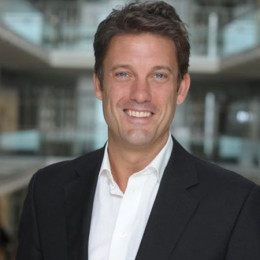 Famously known as a British Journalist, Keir Simmons is working in the famous News Networks named NBC and ITV. He is also popular for appearing as a reporter in the shows like Today, Nightly News, and MSNBC. He was nominated in Emmy Awards(2 times) and Royal Television Society Awards for his contribution in the Journalism field.

Personal Life of Keir Simmons; Know about his Married Life

Keir Simmons is currently married to Jessica Binns. The couple is one of the most loved celebrity couples and their seven years of togetherness inspires many of their fans. Moreover, they are often spotted vacationing and spending quality time together.

Famous British Journalist Keir Simmons with his spouse Jessica Binns during their vacations in Capri, Italy in 2018.

The pair shared the wedding vows in 2012 after dating for several years in Cyclades, Greece. The couple seems to have a fluid relationship as there are no terms rumors of divorce between them.

LONDON : UK : FEB 19 : Can’t think of better people to spend my birthday with!

In addition, the duo is proud parents of twin daughters; Lila Simmons and Arianna Simmons who was born in the same year of their wedding i.e in 2012. The couple lives happily with their two kids in California.

Simmons and his spouse, Binns are united as life partners for more than seven years. He has been spending quality time with partner Jessica Binns in this coronavirus pandemic.

Simmons is currently out of controversies and there is no rumor of him dating anyone in the past. As a Journalist, he loves the media attention and never misses a chance to shine whenever he gets an opportunity. Keir took a picture of his family sharing their life on lockdown with silver linings.

Similarly, Keir Simmons, Today senior internationational correspondent reported on April 2020 that the head of laboratory in Wuhan, China broke his silence and dismissed the possibility that the virus escaped his facility.

What is the Net Worth of Keir Simmons?

Simmons is currently working as the senior international correspondent for the NBC morning show Today since December 2018. Likewise, he regularly appears on the evening broadcast of NBC's Nightly News and as an anchor on MSNBC.

On the other hand, he has also worked as the foreign correspondent for NBC News. Similarly, he was the UK editor and reporter for ITN's ITV News but left that job on August 27, 2012, to join NBC news.

Keir Simmons is currently married to Jessica Binns. The duo shares a good bond are celebrating their 7 years of marital relationship.

Keir Simmons and his wife are the blessed parents of their twin daughters one of whom is Lila Simmons who was born in the same year of their wedding i.e in 2012.

Keir Simmons and his wife are the blessed parents of their twin daughters one of whom is Arianna Simmons who was born in the same year of their wedding i.e in 2012.