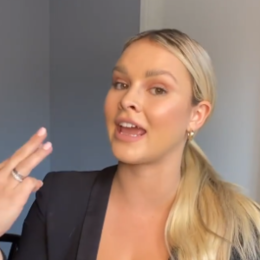 Kinsey Wolanski is a Glamour model who came to the limelight featuring in Maxim, Sports Illustrated, and FHM. Wolanski also has worked for the BLVD Magazine as well as two nationwide TV commercials.

Kinsey Wolanski is possibly single as of July 2021. The swimsuit model has not dated any men ever since she broke up with YouTube stars. It seems like she is more focused on her career and has no interest to be involved in romantic love affairs.

Previously, Wolanski was in a romantic relationship with the Russian-American YouTube star Vitaly Zdorovetskiy. Her ex-boyfriend Vilaty is famous for the identity of "VitalyzdTV."

There's a rumor, Kinsey's affair with the social media superstar blew her up to fame. The pair sparked romance for few years. Unfortunately, Kinsey's relationship with Vitaly turned sour.

On March 29, 2020, the Boca Raton Florida native shared a cute moment he had spent with Kinsey on YouTube. To be precise, they parted separate ways amicably. Zdoroverskiy captioned the post, writing, "We broke up.... forever". In addition, at the end of the video, Vilatly wrote: "Kinsey, I Love You Forever."

Kinsey Wolanski has summoned a whopping net worth of $3 million. Her primary source of income is her career as a swimsuit model and CEO, brand ambassador of BangEnergy. She uses the beverage to file up for her adventures, such as skydiving, snorkeling, and scuba diving.

Wolanski began her modeling career after getting an offer to the model during her visit to Los Angeles. In 2017, the blonde beauty stood eighth in the west amidst Miss Jetset. Furthermore, she earned over 3.7 million followers on Instagram.

A quick scroll through Wolanksi's Instagram wall will give fans a dose of her sultry swimsuit snaps, multiple pranks, her specialty, and daily dips in the swimming pool. Wolanski is pretty much popular on TikTok as well, and she boasts around 100,000 followers on her TikTok.

During an interview with Maxim in January 2018, Wolanski told explained how she got her start. In 2020, Wolanski became a social media group clubhouse member along with Daisy Keech and Abby Rao.

The 24-year-old achieved a great deal of publicity in Madrid two years ago when she darted across the Wanta Metropolitano pitch in a sultry black swimsuit. 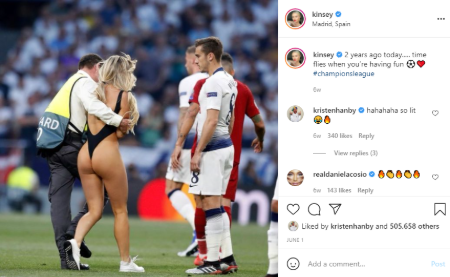 To follow the soccer game stunt, Kinsey streaked across the field in the 2019 Champions League final match in Spain on June 1, 2019. And, it wasn't just fans who failed to take off eyes from her, but the Tottenham midfielder Harry Winks was also caught starring at Kinsey.

The blonde beauty's motive was to promote her then boyfriend's X-rated adult website. And, flaunting her acts resulted in Kinsey spending five hours in prison.

After Kinsey's bold move has catapulted her more into the spotlight, she unhesitantly shared the moment via Instagram post. Likewise, on June 1, 2021, Wolanski marked the second anniversary of the infamous Champions League Steak with a cheeky snap of Harry Winks on her Instagram.