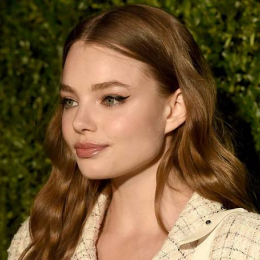 Model turned actress, Kristine Forseth is a famous American actress and model who is better known for working in Netflix films like Sierra Burgess Is a Loser and Apostle.  The 22-year-old Hollywood celebrity is also popular for working as a model for brands like Armani, Juicy Couture, Miu Miu and many more.

Personal Life of Kristine Froseth; Is she Dating Someone?

Kristine Froseth is possibly single as of now and out of dating rumors. The Netflix actress is focused on her career and is never spotted with any men in any events and award shows.

The 22-year-old actress is quite active on Instagram where she garnered more than 693k+ followers. She often shares her personal and professional updates with her fans and followers.

What is the Net Worth of Kristine Froseth? Know more About her Earnings and Career as well:

Thank you @vmagazine for having me in your fall issue!!! Talking identity and upcoming projects! Interview out on stands now or vmagazine.com

Froseth started her acting career by working in the 2017 film named Rebel in the Rye. After that, she starred in the two Netflix movies named Sierra Burgess Is a Loser and Apostle in 2018. Besides, she worked in the web series named New Face in 2013. Until now, she worked in the number of television series, song videos and films like False Alarm, Killing Me To Love You, Junior, Apostle, and many more. Further, she is currently working in the upcoming American drama Film The Assistant in 2020.

The Netflix actress started her modeling career when she was discovered on a catwalk audition at Ski Storsenter in Norway. She was scouted by IMG Models while in New Jersey at a local mall fashion show. Since then, she worked for many brands like Armani, Juicy Couture, Miu Miu, and H&M.

Kristine Froseth was born on 21 September 1996 in New Jersey, the U.S. under the birth sign of Virgo. She holds an American nationality and is believed to be of white ethnicity. She spent her childhood traveling back and forth between Oslo, Norway, and New Jersey due to her father's work. She was raised in the Norwegian family.

Kelly @thesociety on netflix MAY 10th!

The Armani model stands at a height of 5 feet and 7 inches with a pair of attractive green eyes and dark brown hair.