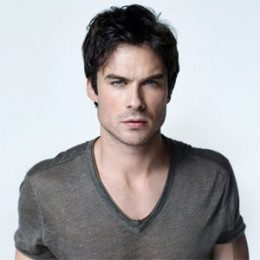 American actor and model, Ian Somerhalder is a son of Robert Somerhalder, an independent building contractor and Edna Somerhalder, a massage therapist. He attended Mandeville High School. In June 2009, Somerhalder was cast in the role of 'Vampire Damon Salvatore' as a series regular in The CW television drama series entitled 'The Vampire Diaries'. He is also a celebrity campaigner for 'RYOT'.

He married Nikki Reed, an actress, and model is known to the general public for her portrayal of 'vampire Rosalie Hale' in 'The Twilight Saga'.The couple married on 26th April 2015.

Being a dad- it’s the best role I’ve ever gotten to play. The only one I’ve ever been good at... Happy late(ish) Father’s Day dads. I hope we can all remember that society is a direct reflection of our parenting. So, whatever we can do to step it up and really double down by investing in our kids, teaching them and being present with them; our world will be truly better. I know it’s hard out there but we can do this-I’m proud to one of you now...

The couple announced they were expecting a child on 2 May 2017. They welcomed a daughter, Bodhi Soleil Reed Somerhalder on 25 July 2017.

Somerhalder amassed a huge net worth of about $8 million as of 2019.

Ian Joseph Somerhalder was born on 8 December 1978 in Covington, Lousiana to parents Edna and Robert Somerhalder.

He studied at Mandeville High School. He started modeling career from age 10 to 13.

He is renowned among his fans playing the role of Boone Carlyle in the TV drama Lost. Also, he is famous for portraying the role of Damon Salvatore in The CW's supernatural drama The Vampire Diaries.

He married Nikki Reed, an actress, and model is known to the general public for her portrayal of 'vampire Rosalie Hale' in 'The Twilight Saga'.