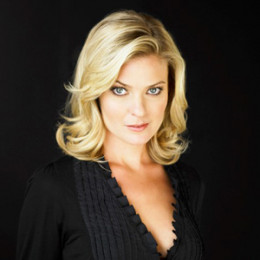 Kylee Evans is an actress most known for her work on The Stanley Dynamic, Billable Hours and Good Witch. Evans is happily married to her longtime boyfriend, Sandy Jobin Bevans.

The proficient actress, Kylee Evans was born in the United States of America. She belongs to Caucasian ethnicity and holds American nationality.

Evans attended a local high school and also enrolled in the drama club at the time.

From her early age, Evans featured in several dramas during school. In 2006 she appeared on a popular comedy series entitled Billable Hours along with Jennifer Baxter, Fab Filippo, and Ron Oliver.

Additionally, she featured in The Stanley Dynamic along with Charles Vandervaart, Taylor Abrahamse, and Madison Ferguson. Recently she came to limelight as she appeared in a popular drama, Good Witch. The series stars Bailee Madison, James Denton, and Catherine Bell.

Kylee Evans is a happily married woman. While out on a date with another guy, she met her now husband, Sandy Jobin Bevans.

Evans and her then-boyfriend watched Bevans' show, and she immediately fell for his performance and dashing looks. Then, she approached him while he was backstage after the show.

Later she broke up with her then-boyfriend and started dating him. Eventually, Evans and Bevans exchanged their vows in 2011 at Pictou Lodge in Nova Scotia.

Seven years as husband and wife and the couple still shares a strong bond.

The promising actress in Hollywood film industry, Kylee Evans is living a lavish life with her husband as she earns a lucrative amount from her career. She holds the staggering net worth of $15 million.

Kylee Evan married her longtime boyfriend, Sandy Jobin Bevans. She walked down the aisle with her husband in 2011 at Pictou Lodge where their closest friends and families were invited.