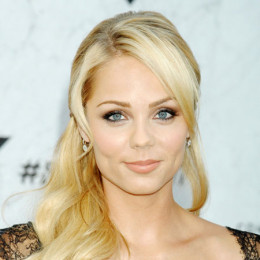 Laura Dianne Vandervoort is an alluring actress, noted for her portrayal as Kara Zor-El in The CW TV series Smallville, Sadie Harrison in Instant Star, Lisa in the ABC science fiction series V and Arla Cogan in the Syfy supernatural drama Haven. In 2014, she was placed no. 17 on Maxim's "Hot 100 Women" list. As of now, she is dating her executive producer boyfriend, Shawn Piller.

Laura Vandervoort is yet unmarried, but once was about to get married to her fiance which was later called off due to complications in their relationship. Her ex-fiance, Corey Sevier is a British actor and host.

After dating 2 years the couple decided to split. Before that, Laura dated a few men in her past days.

Happy Valentines to my My best friend and hopefully one day.... My business partner (inside joke) . . . . .

As of now, Laura is dating an executive producer, Shawn Piller. They post several pictures on them on social media and address one another as their Valentine.

Laura Vandervoort has an estimated net worth of $2 million. Her acting career is her major source of income. She is earning a great salary from her career.