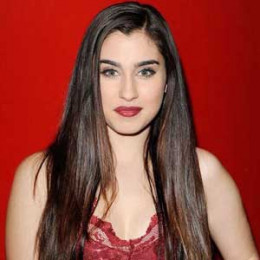 Lauren Jauregui is the member of the famous band, The Fifth Harmony. She along with her band member have released many popular songs and albums that grabbed millions of audiences. Back To Me is her song with Marian Hill which was released in 2016, is the first work being outside of the group. She has a huge fan following of 4.3 million on Instagram and 2.84 million on Twitter. She officially announced being bisexual.

Born to Clara Jauregui and Mike Jauregui as Lauren Michelle Jauregui Morgado on 27th June 1996 in Miami, Florida. Lauren was raised along with her two sisters- Taylor and Chris.

She finished her schooling from Carrolton School of Sacred Hear. Jauregui joined that school in 7th grade. She is a Cuban-American and is of white ethnicity.

Lauren started her career from auditioning in The X Factor (2011). She gave her audition in 2012 at the age of 16 with the song. If I Ain't Got You by Alicia Keys. She passed the audition but was eventually eliminated.

After her failure to take part in the competition, she along with her four friends, Camila Cabello, Ally Brooke, Dinah Jane and Normani Kordei again gave an audition for The X Factor and later named the group, The Fifth Harmony under Simon Cowell.

Simon is an English reality television judge, producer, and philanthropist. Later on, they signed a joint agreement with various Music studios including- Sysco Music and Epic Records.

Lauren and band debuted the song, Better Together on 22nd October 2013. She rose to fame with the song and the band listed in the top 6 list of US Billboard 200 charts.

The album was certified gold in the US by Record Industry Association for selling 1000 copies. And their song ''Worth It" was certified double platinum in Brazil.

Moreover, they earned triple platinum certification in the United States and reached the top 10 in thirteen countries. In  2016 the group released their second album 7/27, which debuted at top 4 on the list Billboard 200.

The album was also certified gold in the United States by RIAA in Poland and again was also certified gold and platinum in Brazil. " Work from Home, " the lead single from her famous album 7/27, became the Billboard Hot 100's first top 10 and top five for a group of girls in a decade. The band was named MTV's Artist to Watch at 2014 MTV Video Music Awards.

The Fifth harmony's girls became the desirable women to every man and became popular worldwide. Not only their songs their dance moves were also awesome. They have inspired many of the fans all over the globe.

In 2012 Lauren was in relation with Keaton Stomber. After dating for a couple of years, they separated in 2014.

Jauregui was again in another relation with Brad Simpson in late 2014. Brad is the member of British pop band, The Vamps'. The relation did not last for long and split up in 2015.

Her sexuality was questioned for several times. In 2016, she was seen kissing Lucy Vives the daughter of Columbian singer, Carlos Vives. Furthermore, she herself announced that she is a bisexual in an open letter to the voters of the president of US, Donald Trump. She is currently single and no such records of marriage till now.

The member of Fifth Harmony, Jauregui has an estimated net worth of $3.5 million whereas her band, Fifth Harmony has $10 million net worth. She is earning a huge amount from her band. She owns a pink Lamborgini and a Ferarri.

Lauren along with band member donated $3000 to Bresha Meadows. Bresha is a girl who was accused of incurable shooting by her father.