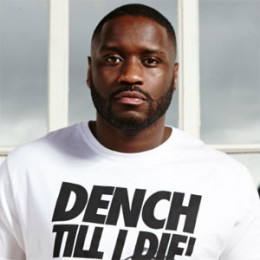 Maxwell Owusu Ansah is a British rapper and an actor recognized by his stage name, Lethal Bizzle. He began his career by forming a grim collective named, More Fire Crew along with his mates. After the group dissolved, he released many songs and albums among which most of them entered the UK Singles Chart.

Born as Maxwell Owusu Ansah on 14th September 1984 in Walthamstow, London, Bizzle is British and belongs to Black ethnicity. His Ghanaian parents raised him.

In 2000, Bizzle began his career in music after forming a grim collective called, More Fire Crew along with Neeko and Ozzie B as MCs. Two years after the formation of the group, they released their first song in 2002 named, Oi! which ranked 7th on the UK Singles Chart. After that, they released their first studio album, More Fire Crew C.V. The song Back Then included in the album ranked #45 on the Chart.

After the album, the crew disbanded, and Bizzle pursued his solo career in music. In 2004, he released his single, Pow (Forward) which was banned from airplay as the lyrics contained some words about gun culture but despite that, it entered the UK Single Chart at #11. Further, it ranked #1 on the UK Dance Chart and even won a MOBO for Best Single. After a year in 2005, he released his debut album, Against All Oddz which peaked #89 on the UK Albums Chart.

In 2007, he released his second studio album named, Back to Bizznizz. It ranked #86 in the UK Albums Chart.

The re-release of Pow started as a joke on Twitter, but due to many retweets by the fans Bizzle released Pow 2011 and upon its release, it ranked #33 on the UK Singles Chart.

By 2013, he began to experiment with different genres of music and released a string non-album single, Not a Saint along with producer Vato Gonzalez and artist, Dutch DJ collaborating with Donae’o. After that he gave back to back songs like Party Right featuring Ruby Goe, They Got It Wrong featuring Wiley, Krept and Konan, Kano, and others.

Apart from singing, he was also involved in acting as appeared in the movie, Anuvahood in 2011 as a cameo. After a year, he also worked in BBC Three comedy drama, Bad Education with casts Jack Whitehall, Charlie Wernham, Sarah Solemani, Jack Binstead, Mathew Home and others where he competed in a rap battle with the principal.

After that, he featured on BBC’s Match of the Day 2 and ITV2’s Celebrity Juice making a guest appearance. He also took part in BBC iPlayer along with DJ Semtex, DJ Target, and A.Dot.

The rapper, Bizzle is possibly single in the current days. It looks like he is not comfortable sharing information regarding his love life and affair. Currently, he is more focused on building his career as a rapper.

As of 2017, he came to highlights after a British hip hop group, N-Dubz used his intellectual property or a hook line, leave it. The band member, Kem Cetinay and Chris Hughes to whom he called Kemp and Ross were criticized by him after they used the phrase.

Later on, they came to a settlement and agreed to pay some percentage from their song to Bizzle.

He even posted a statement after the settlement,

‘’Kemp and Ross came to their senses and we've agreed to a percentage of the Little Bit Leave It song there so no more issues. So you lot, go out there and support the ting cos now I'm getting paid for it, I'm going to make sure my cheque is healthy so support it, it's out now and all that good stuff.’’

An English rapper, Bizzle's song Pow(Forward) ranked number one on the UK Dance Chart. Also his latest EP You'll Never Make a Million from Grime ranked #79 on the UK Albums Chart, his highest charting album release. He has also appeared in numbers of series and movies which adds more to his income.

He also co-owns a successful T-shirt business along with his footballer cousin, Emmanuel Frimpong. From all these sources he has an estimated net worth of $1.16 million.

Besides these, he owned a red Ferrari 458 which he lost in an accident in 2013. The car was crushed, but no scars were seen on him.