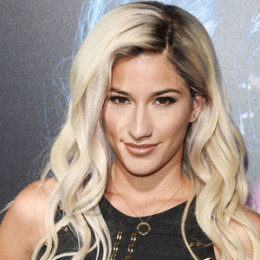 American dancer and a singer, Lexy Panterra is a well-known Twerking dancer. She has gained a massive following on her YouTube channel, LexTwerkOut which she founded in 2014. Panterra is also active on other social media accounts, Facebook and Instagram, where she's hoarded more than 2.3 million followers to the date. She is in a relationship with British actor Gregg Sulkin.  At the age of five, Panterra won her first beauty pageant. She also won her first motorcycle race when she was 8 at the LACR.

Lexy Panterra was born Alexis Leila Afshar on 22th May 1989 in California, United States of America. She belongs to white-American ethnicity and holds American nationality. Her nickname, "Lex Luther" was given to her father when she was just 2. The story behind it was that she was a mastermind and would easily manipulate everyone around her, hence the nickname!

Panterra was born to Tony Panterra and Elizabeth. Her father is a professional motocross racer and also a world class hot rod builder whereas her mother is an artist. She has three brothers.

Her late paternal grandmother was also a famous songwriter, producer, and poet of the late 60's & 70's which encouraged her to pursue her career in an entertainment field.

By the age of 5, she won her first beauty pageant. As her father is a multiple race winner, she was no doubt attracted to racing and fast cars. Panterra had started driving at pretty early age and she competed in the bike race when she was only 8. She has won several races as well.

Panterra graduated from the local high school. She then started her training in various dance forms such as hip-hop, ballet, and few others.

Lexy Panterra started her career as a motorbike racer but she put a brake on her racing career following a terrible accident of her father who was seriously injured in a motocross accident. She then began to a trained ballet & hip-hop dancer. Previously, she was also associated with R&B group.

In 2014, Pantera started her YouTube channel, Lex Twerkout and started posting the exclusive, modern, fun workout videos using Twerking. She rose to stardom after her twerking videos became viral. As of 2018, Pantera has more than 1.6 million subscribers and over 286m views.

We are strong ! No one can tell us we’re wrong !

After a year, Pantera opened her another self-titled YouTube channel, Lexy Pantera. In 2015, she collaborated with Playboy Magazine for the Twerking Through History video. The video garnered worldwide popularity. Aside YouTube, Lexy Panterra was also a member of all-girl R&B group but later she left the group and started singing solo. She released her first single, Supa Dup which was commercially successful.

Later she launched her second single, Neon written by The Jackie Boyz and Co-Written by Major Williams whereas produced by super prodigy proMDL, MDL.

In 2013-2014, Lexy Panterra courted controversy when an anti-snore spray TV ad showed her as a "Muslim girl in a black veil being embraced by an American soldier". Communities all around the world including both Muslim and non-muslim took the commercial as insulted video but this scandal faded away in no time.

Queen of Twerking, Lexy Panterra has earned a massive popularity from social media. She has successfully established herself in the short span of her career. As per some online sources, her estimated net worth isn't less than six-digit figures but official confirmation has yet to come.

Lexy Panterra is romantically involved with her longtime boyfriend, Gregg Sulkin who is a British actor. The duo is together since August 2017 and shares a strong bond with one another without any rumors of the split.

She was also linked with Amerian actor, Nev Schulman but both the parties never spilled a bean regarding their link-up rumors. Prior, Panterra, Greg Sulkin had a romantic affair with British actress, Bella Throne. The duo dated for a year before their official split in 2016.