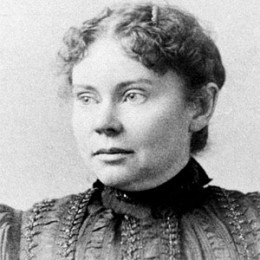 Lizzie Borden rose to fame after being imprisoned in accusation for killing her own father and step-mother. After the investigation, Borden was released as no clue was found connecting her to the murder.

Lizzie Borden was born Lizzie Andrew Borden on 19th July 1860 in Fall River, Massachusetts. Broden’s parents, Andrew Jackson Broden (1822 – 1892) and Abby Borden (stepmother) raised her along with her sister, Emma Borden. Her biological mother, Sarah Anthony Broden died of spinal disease and uterine congestion in 1863. She is American and belongs to White ethnicity.

Borden's father was a successful property developer. He owned a huge amount of commercial property and was the president of both the Union Savings Bank and a director of the Durfee Safe Deposit and Trust Co.

Borden and her sister had an orthodox and religious upbringing, attended church regularly. She did not share a good bonding with her stepmom and never addressed her as her mother instead used to call her Mrs. Borden.

On 4th August 1982, Lizzie Borden’s father and her stepmother were murdered brutally in their Fall River home. Her father was killed on the sofa while sleeping whereas her stepmother was stabbed by a small axe in the bedroom.

Borden at that time went to alert their maid, Briget about the incident. After the investigation, the police made Borden as one of the suspects as she was the first person to see the dead body. Her sister was out of town during the incident.

Borden was then arrested after several trails on 2nd December 1892. Despite everything, Borden never took her stand, and her testimonies were not allowed into the evidence.

On 20th June 1893, Borden was released, and all the murder charges were dropped as no evidence against her was found.

Personal Life after the release

Lizzie Borden after release from prison had a bad image in the society. Borden had no social life after that as everyone including her neighbors considered her a criminal. In 1897 she further ruined her image after being accused of shoplifting.

In 1905, Borden had a conflict with her sister so, left the house and began living alone. Besides this, she was rumored to be in a relationship with an actress, Nance O’Neil.

On 1st June 1927, Lizzie Borden died of pneumonia. Before the death, she removed her gallbladder and felt ill for several months.

Borden was found dead in her Fall River house. Nine years later, Borden’s sister also died of chronic nephritis at the age of 76 in Newmarket, New Hampshire. Both of the sisters were buried side by side in the family plot in Oak Grove Cemetery, Fall River.

The murder case became popular, and several plays, songs related to it was made. Using Borden’s name a skipping-rope rhyme was prepared which was tuned from the then-popular song, Ta-ra-ra Boom-de-ay. The rhyme goes like:

And gave her mother forty whacks.

When she saw what she had done,

She gave her father forty-one

Lizzie Borden owned $300k worth of assets, at present, worth $800k. Some days before the death of her parents, she bought the property from her father for $1. Later Borden sold it for $5k which now cost $133k.

Borden before her death left $555k to the Fall River Animal Rescue League, $9k for the care of her father’s grave and $111k to her friends and cousins. Analyzing all these, Broden had a total property of $675k, and net worth in a six digit figure.