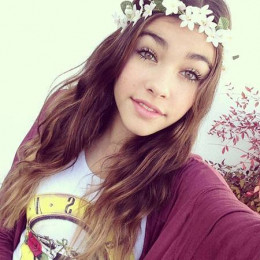 Madison Elle Beer is an American actress as well as a singer. When a pop star Justin Bieber tweeted a link of her video of her singing she gained media attention.

Madison Beer is possibly single as of now but previously she was in a romantic relationship with vine star Jack Gilinsky in 2015. Before that, she was rumoured to be dating singer, Justin Bieber.

Madison Beer holds a net worth of $2 million from her musical career. Like Beer, Madilyn Bailey also rose to popularity on YouTube.

Born on March 5, 1999, Madison Beer is the daughter of Robert Beer, a luxury home builder and Tracie Beer, an interior designer. She was raised in a Jewish family with her younger brother, Ryder. She attended Jericho Middle School.