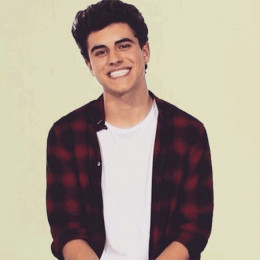 Jack Gilinsky is a Vine star, best known as as one of Jack from his Vine account Jack & Jack, along with Jack Johnson. In 2014, they released their hit single "Wild Life", which was placed at no.87 on the US Billboard Hot 100 Chart. They were voted the top Social Climber at the 2015 MTV Woodie Awards. He was raised by Katherine and David, along with two older sisters: Molly and Laura.

Talking about his sexuality, he is straight with no doubt. Till now he hasn't married anyone but he dated a gorgeous American pop singer Madison Beer  with whom he is spotted quite often at various functions and events.

They seemed to have a great chemistry but they remained together for two years until 2017. We can follow him on his Twitter page @jackgilinsky.

Jack Gilinsky was born on 10 September 1996 in Omaha, NE. He has two sisters named Laura and Molly.

He became the part of a group called Magcon Boys with other Vine stars including Nash Grier.