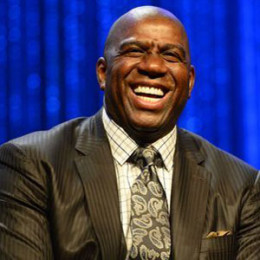 Retired basketball player Magic Johnson was honored as one of the 50 Greatest Players in NBA History in 1996. He is a is a business powerhouse, philanthropist, entrepreneur, broadcaster, and motivational speaker. Johnson won a championship and was honored with an NBA Finals Most Valuable Player Award in his rookie season. He has the net worth of $600 million. He has been working as an advocate for HIV/AIDS prevention and safe sex since his retirement.

Magic Johnson was born in Lansing, Michigan, on 14 August 1959  under the birth sign Leo. He belongs to African-American ethnicity and holds American nationality. He has six siblings.

Johnson is the son of Earvin Johnson Sr. and Christine Johnson. His father was a General Motors assembly worker, whereas his mother was a school custodian. His father also worked as a garbage collector and also as a janitor at a used car lot, all while never missing a day at General Motors.

Johnson's mother spent hours cleaning the house even after her job and prepared the meal for the next day. He was highly inspired by his parent's strong work ethics.

As a child, Johnson often used to help his father on the garbage route. Other kids teased him shouting 'Garbage Man' at him.

Johnson grew up in Lansing developing an interest in basketball. His father played basketball in high school in Mississippi and mother, grew up in North Carolina playing basketball as a child. He learned some of the tips and techniques of the game from his father.

Johnson suffered a lot during his school years, as racism was strong at the time. There were incidents of throwing rocks at buses that carried black students. Even white parents refused to send their children to school.

Meanwhile, some black students chose him as their leader, and that's how he stepped forward in his career. He was first called 'Magic' during his second year at Everett High School. He scored triple-double of 36 points, 18 rebounds, and 16 assists.

Johnson started playing basketball while at Everett High School. At the end of his high school basketball career, he had two All-State selections. He was considered as the best high school player ever to come out of Michigan at the time. He also made it to the 1977 McDonald's All-American team.

Johnson's college basketball career began at the Michigan State in East Lansing. He decided to join Michigan State after coach Jud Heathcote told him that he could play for the point guard position.

Johnson did not play professionally during the time. He instead focused on communication studies major, as he desired to become a TV commentator.

As a freshman, Johnson averaged 17.0 points, 7.9 rebounds, and 7.4 assists per game, and led the Spartans to a 25–5 record. He also achieved the Big Ten Conference title and a berth in the 1978 NCAA Tournament.

During the 1978-79 season, the Michigan State defeated Indiana State 75-64 at the NCAA Tournament. He was named the 'Most Outstanding Player' of the Final Tour.

Johnson entered the NBA draft in 1979, after two years in the college where he averaged 17.1 points, 7.6 rebounds, and 7.9 assists per game.

Johnson was drafted first overall by the Los Angeles Lakers in 1979. He was selected to the NBA All-Rookie Team, as he averaged 18.0 points, 7.7 rebounds, and 7.3 assists per game for the season. He was also named an NBA All-Star Game starter at the time.

During the time, The Lakers made a 60-22 record in the regular season and successfully reached the 1980 NBA Finals. In the finals, they faced the Philadelphia 76ers, who were led by Julius Erving.

Johnson became the only rookie who won the NBA Finals MVP award. His clutch performance is regarded as one of the excellent performances in NBA history.

Johnson faced problems in his basketball career when he suffered torn cartilage in his left knee. He missed 45 games due to his injury. He even stated that his rehabilitation period was the 'most down' he ever felt.

In 1996, Johnson was honored as one of the 50 Greatest Players in NBA History. He was inducted into the Basketball Hall of Fame in 2002 and 2010. He was also rated the greatest NBA point guard of all time by ESPN in 2007

Johnson completed his fifth and final NBA championship of his professional career with 21.1 points, 550 shooting, 13.0 assists, and 5.7 rebounds in a game. He made the public announcement of his retirement in a press conference held on 7 November 1991.

Besides, Johnson wrote a book on safe sex during his retirement. He was involved in several businesses and worked as a commentator touring across the globe with his basketball team and NBA players.

Besides, Johnson hosted a late night talk show on the Fox network, The Magic Hour in 1998. The show was canceled due to low ratings.

Johnson returned to the NBA as a coach at the end of the 1993-94 NBA season. During the 1994-95 season, he was paid $14.6 million as per the contract. He coached first five of the six games but later resigned after losing the next five games.

The team also toured the United States and played against the teams from CBA. He scored a total of 30 points, 17 rebounds, and 13 assists at the end of the game.

Return to The Lakers

Johnson returned to the Lakers in 1996. He made a record of 55-0 earning around $365,000 per game. He played with the team frequently over the next years, with possibly the most memorable game occurring in November 2001.

Johnson became the president of basketball operations for the Los Angeles Lakers on February 21, 2017. He replaced Jim Buss.

Johnson is a married man. He resides in Dana Point, California. He is a Christian and a supporter of the Democratic Party. In 2006, he publicly endorsed Phil Angelides for governor of California.

Johnson supported Hilary Clinton in the 2007 presidential campaign. He endorsed Barbara Boxer in her race for re-election to the U.S. Senate in 2010. He also endorsed Barack Obama for President, in 2012.

I’m so blessed to spend this holiday with my amazing family. Happy Thanksgiving to all!

Johnson married Earlitha "Cookie" Kelly in a private ceremony in his hometown. Their wedding ceremony was attended by many guests including Thomas, Aguirre, and Herb Williams. They have a boy, Earvin III (EJ) from the marriage.

His son, Earvin is openly gay and has starred on the reality show, Rich Kids of Beverly Hills. They also adopted a daughter named Elisa Johnson in 1995. Their daughter, Elisa is attending the Fashion Institute of Technology.

In 1981, Johnson became a father the first time together with his ex-girlfriend, Melissa Mitchell. Melissa gave birth to a son named Andre Johnson in 1981. Andre was raised by his mother. However, Johnson used to visit him each summer.

Johnson publicly announced that he's suffering from HIV and would retire from the team in a press conference held on November 7, 1991. He also stated that his wife Cookie and their unborn child are not affected by the disease.

Johnson is the founder of Magic Johnson Foundation. He created the organization following his infection in November 1991. The foundation helped to combat HIV at the beginning and later diversified including other charitable goals.

In 1992, Johnson joined the National Commission on AIDS. It is a committee appointed by members of Congress and the Bush Administration.

Magic Johnson's Net Worth and Salary

He collected a huge fortune with his hard work and dedication. He is the owner of Magic Johnson Enterprises worth over $1 billion. For last few years, he has worked under the partnership with Starbucks, 24 Hour Fitness, T.G.I. Fridays, and AMC Theaters.

Magic Johnson's net worth is $620 million at present.

Here's the list of his salary as per his contract:

The basketball legend owns a house worth $7.6 million in Dana Point, California. The house consists of seven bedrooms.

Johnson is one of the most successful Afro-American businessmen in the United States.  He also owns a fleet of luxury cars including Ferrari and BMW. He owns a private jet as well.

Johnson once owned 4.5% stake in the Lakers and 105 Starbucks, which he reportedly sold for $100 million in 2010. He also owned an investment company, Magic Johnson Enterprises valued at $1 billion. He started the billion-dollar conglomerate in 1987.

In 2012, Johnson and Guggenheim Partners (an investment firm) purchased the Los Angeles Dodgers for $2.15 billion. The deal was the most money paid for a North American sports franchise, according to the Major League Basketball.

In November 2014, Johnson became an investor and board member for The Marvel Experience. It is a traveling entertainment show including an animated, 4D and multimedia massive adventure featuring Marvel’s superheroes.

Johnson married Earlitha "Cookie" Kelly in a private ceremony in his hometown. She gave birth to a boy, Earvin III (EJ).

Andre was born in 1981. He is the first son of Magic and Melissa. He was raised by his mother, however, Johnson used to visit him every summer.