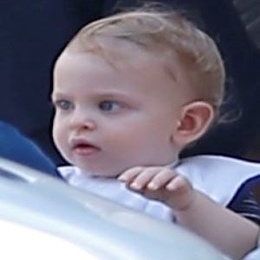 Magnus Mitchell Handelman is the second son of Elizabeth Banks and Max Handelman. Despite being a celebrity kid his parents has maintained a low key lifestyle for him.

Magnus is the second son of actress Elizabeth Banks and her husband. His older brother Felix Handelman was born on March 2011.

Magnus' mother and Hunger Games famed actress Elizabeth Banks has been very open about her medical condition and surrogacy.

While talking to US Magazine after the birth of her second son, she revealed:

"It was a womb issue for me. Embryos wouldn't implant."

In the same interview, she added:

"It's a big leap, inviting this person into your life to do this amazing, important thing for you. And it's hard losing that kind of control. But our surrogate is so extraordinary, and she's still in our lives. She's like an auntie."

Magnus Mitchell Handelman is minor; thus, he is wholly dependent on his parents for means of living. Luckily for him, his parents are wealthy, and he enjoys a lavish lifestyle.

Magnus parents' are the founders of the production company  Brownstone Productions which have produced a sucessful franchise in the forme of Pitch Perfect. In addition to that, his father, Max Handelman, is a author and sportswriter. In contrast, his mother, Elizabeth Banks, is a sucessful actress who has worked in big movies such as Spider-Man Trilogy and The Lego Movie. It is reported Magnus' parents combined Net Worth is $50 million.