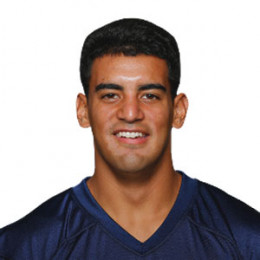 Winner of the 2014 Heisman Trophy, Marcus Mariota is an American football quarterback. He plays for the Tennessee Titans of the National Football League. Kiyomi Cook is the current girlfriend of Marcus.

Marcus Ardel Taulauniu Mariota simply known as Marcus Mariota was born on October 30, 1993. He was raised by his father, Toa Mariota, and mother, Alana Deppe-Mariota in Honolulu, Hawaii.

He grew up with his younger brother Matt Mariota. His mother is German and father Samoan, hence he is of mixed descents. He had a keen interest in football from a very early age.

Mariota attended the Saint Louis School in Honolulu and graduated from the University of Oregon. He was a player in his school and college and played quarterback for the Tennessee Titans of the National Football League.

Marcus in 2015 NFL draft was selected as the second overall pick in the first round by the Tennessee Titans.

During his college and school time, Mariota played in a series of matches. He was praised for his great performance and was given the name of Inter-Scholastic League of Honolulu Offensive Player and PrepStar Magazine All-West Region with the state title for his team. In the 2011-2012 NCAA seasons, he was a teammate with running back LaMichael James.

The handsome player Marcus Mariota is currently dating Kiyomi Cook. Cook is a senior from Gresham Ore and had been a midfielder for the Ducks soccer team.

Previously, Mariota dated his high school sweetheart Nicole Watase. Nicole was a cheerleader at Sacred Hearts Academy. They dated for several years and eventually split up.

Marcus makes a lucrative amount from his profession as a player. He receives $525,000 as his salary and has accumulated an estimated net worth of $6 million.