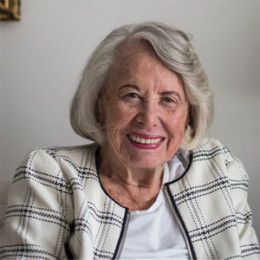 An American gossip columnist, Liz Smith was known as The Grand Dame of Dish who used to write columns for various newspapers and magazines including New York Daily News, Washington Post, and Cosmopolitan. She also worked for the Fox News and Newsday. Apart from her professional life, she was married twice in her lifetime and came out as a bisexual before her death.

Liz Smith was born Mary Elizabeth Smith on 2nd February 1923 in Fort Worth, Texas with the birth sign, Aquarius. She was American and belonged to White ethnicity. Her parents, Sloan Smith and Sarah Elizabeth McCall raised Smith. She attended Hardin-Simmons University, a Baptist-affiliated college in Abilene, texas. Smith graduated with a degree in journalism from the University of Texas in 1949.

Smith, who was a gossip columnist attracted millions of readers. Prior to that, at the very initial phase of her journalism career, she appeared as a proofreader, typist after which she began to work for Mike Wallace as a news producer at CBS Radio. She then worked for almost five years as a news producer for NBC-TV and also worked for Allen Funt on Candid Camera.

In the 1950s, Smith worked in the Hearst newspaper’s popular gossip column, Cholly Knickerbocker where she appeared as a ghostwriter. Almost a decade later in the 1960s, she worked as an entertainment editor for the Cosmopolitan magazine and later appointed as Sports Illustrated’s entertainment editor.

As of 1976, Smith began working in a self-titled gossip column named, New York Daily News in the strike newspaper. Along with this, she also appeared on WNBC-TV’s show, Live at Fire and worked there for almost eleven years for which she even won Emmy Award.

Later, the head of Fox Broadcasting Company, Barry Diller and Rupert Murdoch hired Smith to start a talk show with Roger Ailes (an American TV executive). In 1991, after she took an exclusive interview with Ivana Trump at the time of her divorce with her husband, the president of the US, Donald Trump,  she became one of the highest paid journalists of the country.

In 1995, Smith joined Newsday which she left in 2005 after a dispute raised upon the contract. After the settlement of the conflict, she began working at the New York Post and the Staten Island Advance. Apart from this, she served on the Fox News’ show, Fox & Friends for almost seven years and became one of the first columnists to publish the column in three of the major newspapers.

Some of the famous works include Mia Farrow and Woody Allen’s impending parenthood in which her never relying on outside information and giving her own point was really appreciated by all.

She was one of the leading journalists of the time. Later, along with other members, Joni Evans, Lesley Stahl and Mary Wells Lawrence, she founded a website named, wowOwow that was mainly for women so that they can talk freely about politics, gossip, and culture.

Smith married twice in her lifetime and was even divorced twice. At first, she married her college sweetheart, George Edward Beeman (World War II bombardier) in 1944. But their relationship did not last long and divorced almost after three years in 1947.

After the separation from her first husband, she married second time with Fred Lister which later ended in 1962. Even after marrying twice, she had no children. Soon after their split, she came out as bisexual and became the role model of the LGBT movement.

At the very old age of 94, the famous journalist died on 12th November 2017 at her home in Manhattan, New York due to natural causes. Her friend, Joni Evans confirmed her death and announced to the media.

The talented journalist, Smith, was one of the highest paid journalists in the US at one point in her life. The lady who arrived New York decades back with just $50 earned up to million in her lifetime. Her major source of income was her journalism, her website and her job as a gossip columnist from which she made lots of money when she was alive.

Apart from this, she also earned much of the amount from her two books, Natural Blonde in 2000 and Dishing: Great Dish- and Dishes- From American’s Most Beloved Gossip Columnist in 2005 where she wrote about celebrity stories which became one of the best-selling memoirs.

Along with that, she owned a website, wowOwow.com from which she also earned a decent amount. When Smith was alive, she did not disclose anything about her net worth but as per the NY Daily News, they paid $62k-$66k salary to their columnist then so, she might have earned a related amount.

Besides, her earning, she even donated $6 million to Liberty Partners and millions to AMFAR (amfAR, The Foundation for AIDS Research) as a charity which she collected from various sources.

After the first divorce, she got married for the second time along with Fred Lister in 1957. This time also the same story repeated and ended their relationship in 1962.