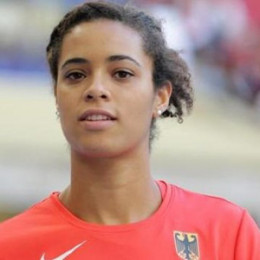 Marie-Laurence Jungfleisch is a German professional athlete specializing in the high jump. Her personal best is 2.00 meters in outdoor and 1.97 meters in indoors. She finished fourth at the 2017 World Championship.

Marie-Laurence Jungfleisch was born on 7th October 1990, to a French father and Congolese mother in Paris, France. When she was 3, she moved to Freiburg im Breisgau, Germany with her family.

From childhood, she had interest in athletic sports and also participated in school competitions. She won the 2008 and 2009 German Youth titles including the 2011 German indoor senior title.

She was one of the youngest members of the German contingent sent to the 2011 European Indoor Championships. With Ariane Friedrich absent due to an Achilles injury, it was up to her to carry the cudgels for her country in the high jump. She completed the qualifying match with the score of 1.89m marks. That year she also won the German indoor senior title. Later, she competed in the European U23 Championships, finishing in the 8th place with a 1.87m jump.

After participating in different European Championships, she participated inWorld Championship in 2013. She placed 11th in the qualifying match with a 1.92m leap.

In 2017 World Championships held in London, she finished in the fourth place.

This 26 years old athlete's career has overshadowed her personal life which makes her fans curious about her boyfriend, love life, and personal life. According to the sources, she is currently single.

During her leisure period, she loves to travel to different places with her friends. Malaika Mihamba also a professional long humper is one of her close friends. She wears the shoes from the NikeAir.

Marie is one of the rising athlete specializing in the high jump. She has just begun her career and made her participation in few of the international games. Her net worth is still not disclosed in the media, but her way of life suggests she earns decent amount adding up to a net worth probably in six figures.